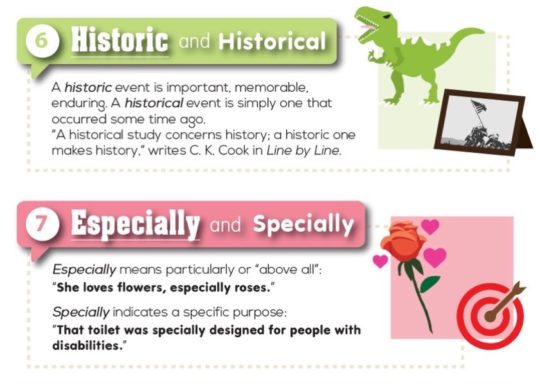 A new visual released by the team from Grammar Check, a popular online grammar and spell-checking tool, is a great addition to our growing archive of language and grammar infographics.

The infographic lists twelve popular English words that are still used in the wrong way. You won’t find here the comparison between “your” vs. “you’re” – this confusion has been explained already in dozens of other infographics.

Instead, you will have a chance to compare “historic” with “historical,” or “especially” with “specially.” Study the infographic carefully, and the chances are you won’t be making these common mistakes any more… ups, anymore.

Click or tap the visual below to see it in full resolution.

Keep exploring. We’ve got a huge archive of infographics related to books, libraries, reading, and language: