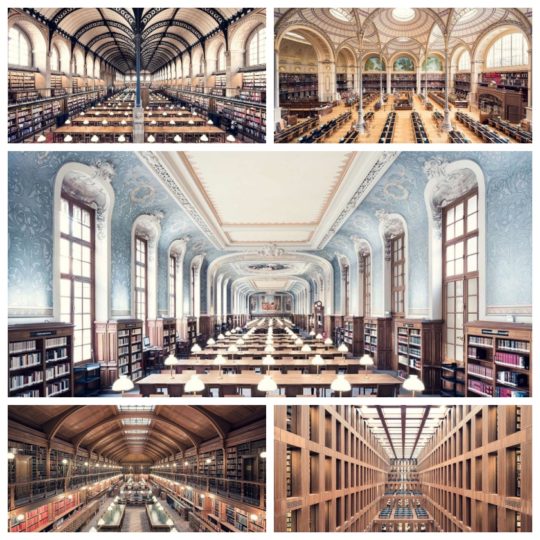 Stunning photos by Thibaud Poirier show the beauty of reading rooms and describe what libraries are about.

Libraries are the most magical places on Earth. They look great in reality and on the pictures, no matter the time of a day or light conditions. Some photographs, however, are better than others.

The mesmerizing photos created by a Paris-based self-taught photographer Thibaud Poirier show much more than just the beauty of the libraries.

The perfect symmetry, wide angle, and attention to details in these photographs evoke a feeling of harmony, order, and better perspective.

Aren’t they the reasons we visit libraries? To learn and get a better perspective of what we’ve learned? To find the right order for the bits of information we’ve found? To weight them in a hunt for the perfect balance?

During his trips around the world, Poirier developed a fascination for architectural forms and urban environments. His talent is perfectly reflected in the photographs of the reading rooms of libraries he visited.

Poirier’s perspective pays homage to the personal touches and interpretations of literature that these architects brought to each library. Like fingerprints, each architect crafted his vision for a new space for this sacred self-exploration.

The libraries are mostly classic, and mostly from France, but you will also see the examples of the contemporary design, naming only the main library of the Berlin’s Humboldt University, or the Central Library of Stuttgart.

Below, we present our favorite photos. Make sure to check out the the entire collection of 25 libraries on Thibaud Poirier’s website. Yes, the Long Room in the Old Library of the Trinity College is there as well.

By the way, have you already seen our extensive list of wonderful modern libraries from around the world? We’ve recently added 15 new examples, showing how libraries evolve in the contemporary world. 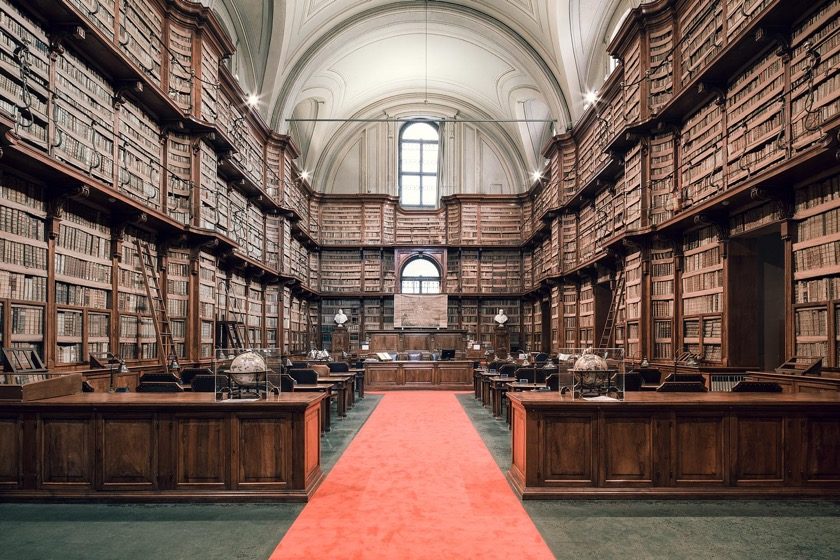 Biblioteca Angelica. The Angelica Library is the oldest public library in Rome, and the second in Italy, after Biblioteca Ambrosiana. It was opened to the public in 1604. 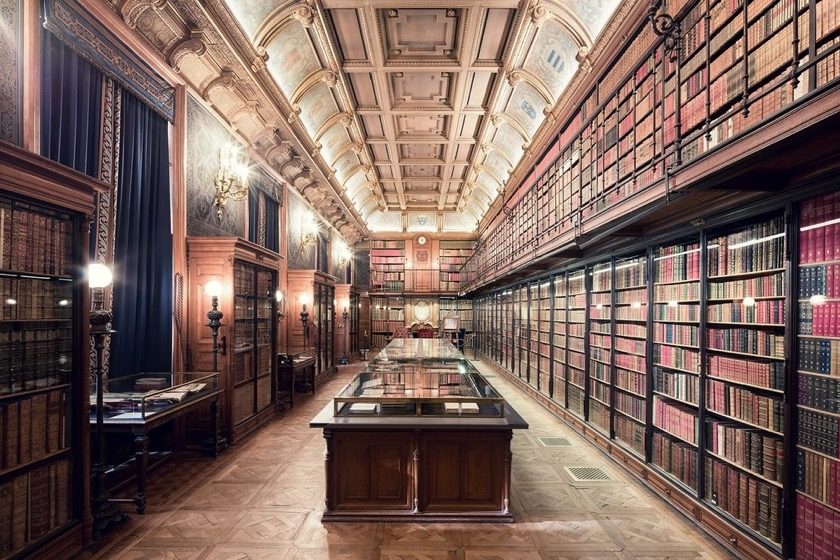 Bibliothèque et Archives du Château de Chantilly. This amazing Reading Room is a part of the Library and Archive of the Chantilly Castle in northern France.

The Reading Room at the Chantilly Castle contains 1,500 old manuscripts making it the second largest illuminated manuscripts library in France, after The Bibliothèque nationale de France. 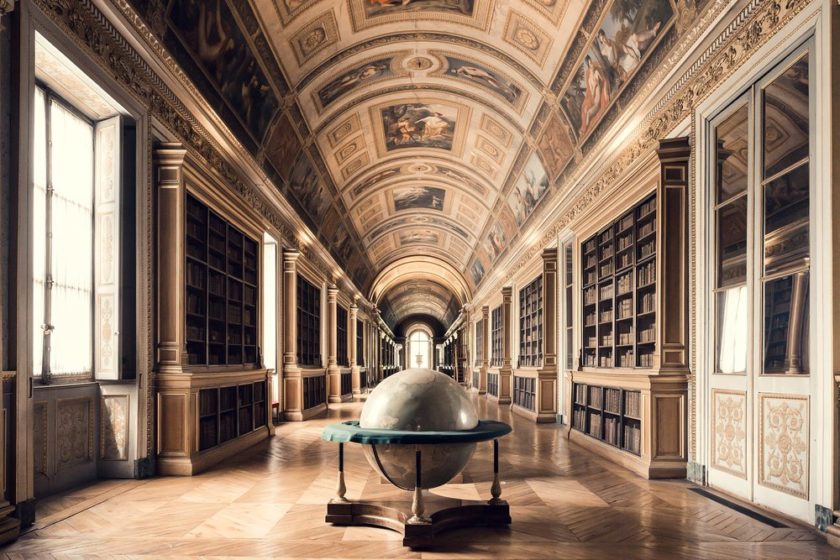 La bibliothèque du Château de Fontainebleau. The library at the Fontainebleau Palace (southeast of Paris) is called Diana Gallery and it’s the longest room in the château, taking 80 meters (242 feet). It was turned into a library in 1853, under Napoleon III. 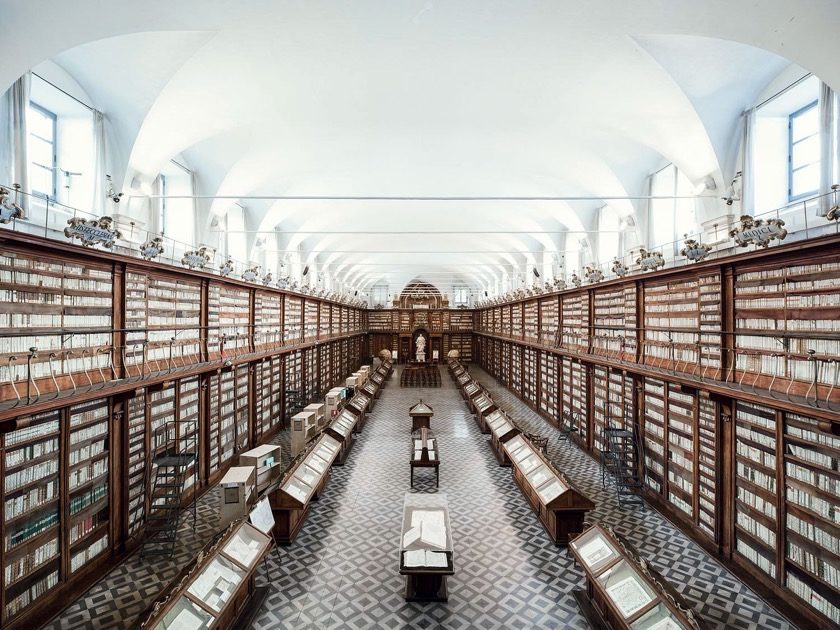 Biblioteca Casanatense. The Casanata Library is named after Cardinal Girolamo Casanata. His will was to open it to the general public.

The library was established in 1701 and soon became one of the most important and extensive libraries of the time, being a home for 20,000 books. Currently, the library’s collection contains approximately 400,000 volumes and 6,000 manuscripts. 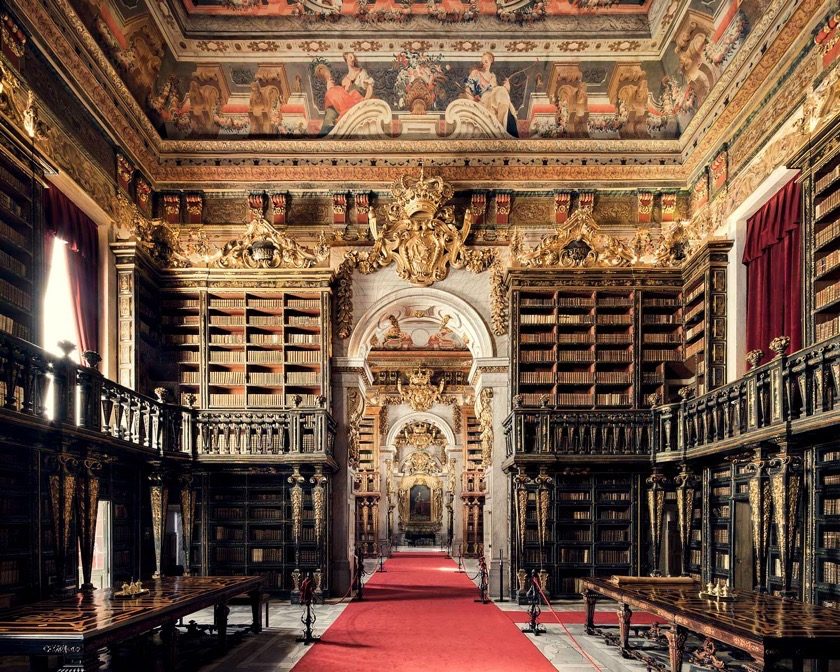 Biblioteca Joanina. The Joanina Library is located in the historic city of Coimbra, in central Portugal.

The library was founded by King John V in the 18th century, as a part of the University of Coimbra. Three floors shelter more than 200,000 volumes, including the works of medicine, geography, and humanistic studies dating from the 16th century. 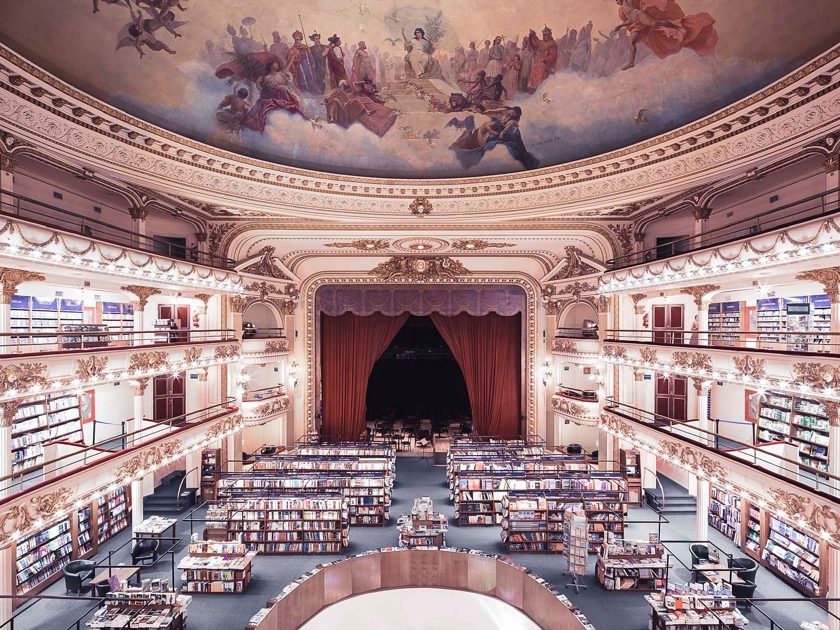 El Ateneo Grand Splendid. You are looking at the second most beautiful bookshop in the world, according to the Guardian.

The building opened in Buenos Aires in 1919 as a theater, Teatro Gran Splendid, designed to house more than one thousand visitors. Since 2000, Gran Splendid was gradually converted into a book and music shop. Over a million visitors walk through its doors every year. 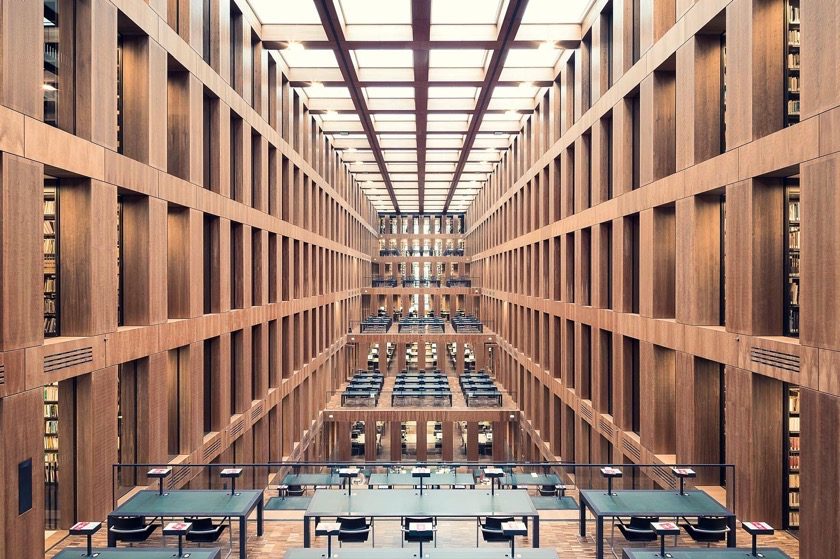 Jacob-und-Wilhelm-Grimm-Zentrum. Grimm Center is the main library of the Humboldt University in Berlin. It was opened in 2009 and preserves, among many other volumes, the major part of the private library of Jacob and Wilhelm Grimm. 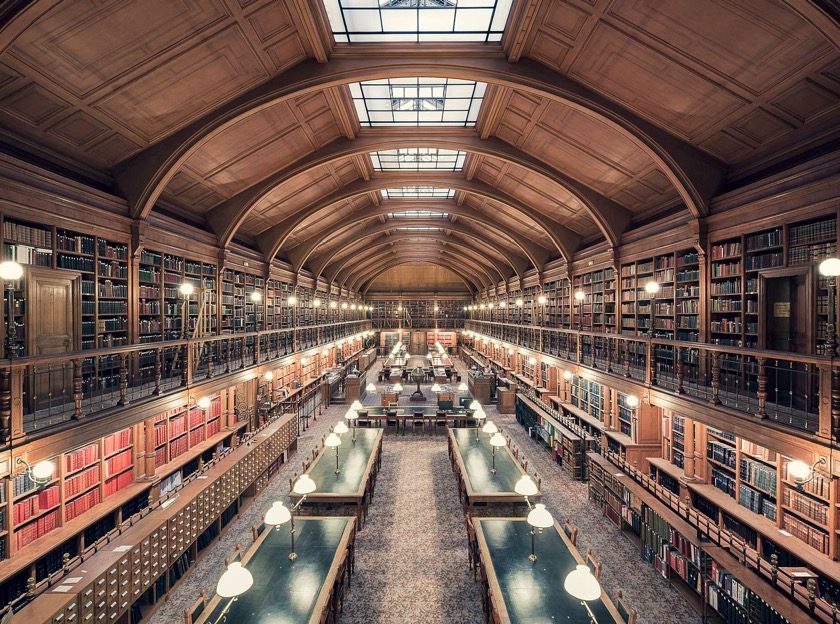 The library was moved to the fifth floor of the newly opened city hall building in 1890 and included at that time around 15,000 volumes. Today it houses approximately 600,000 printed volumes. 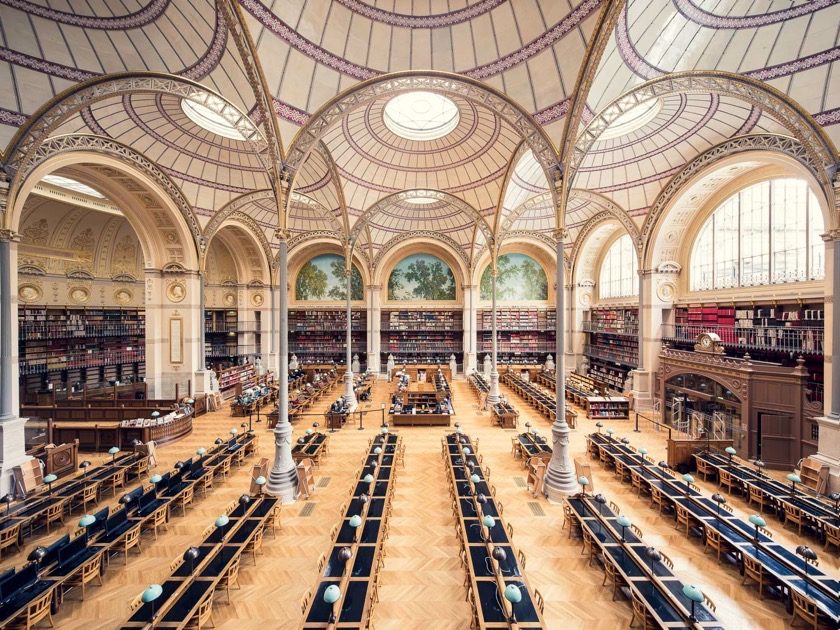 Bibliothèque nationale de France, Salle Labrouste. This beautiful reading room is called Salle Labrouste, after its architect Henri Labrouste, and is a part of the Richelieu site of the National Library of France. It includes 900,000 works. 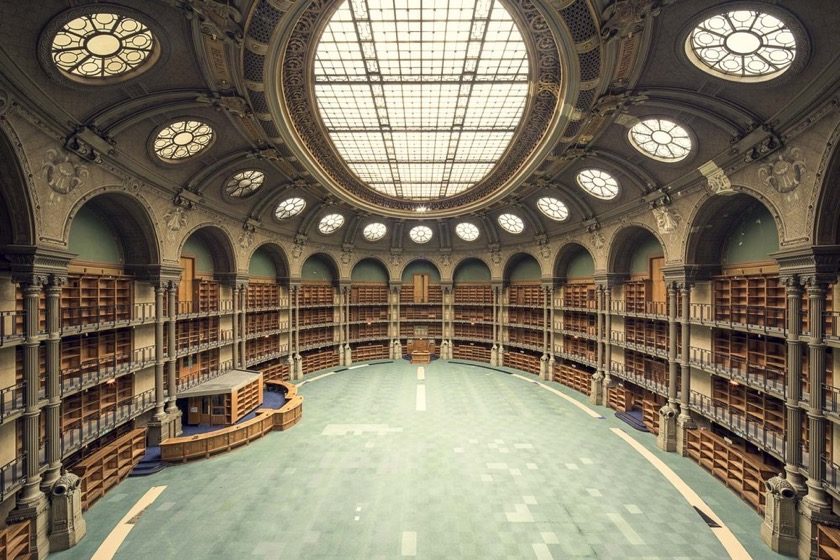 Bibliothèque nationale de France, The Oval Reading Room. Here is another reading room from the Richelieu complex of The National Library of France. It was designed by academic architect Jean-Louis Pascal.

A very special thing about this particular photograph by Thibaud Poirier is that it was taken before the renovation of the room. You’ve probably spotted there are no books on the shelves, no desks or chairs. 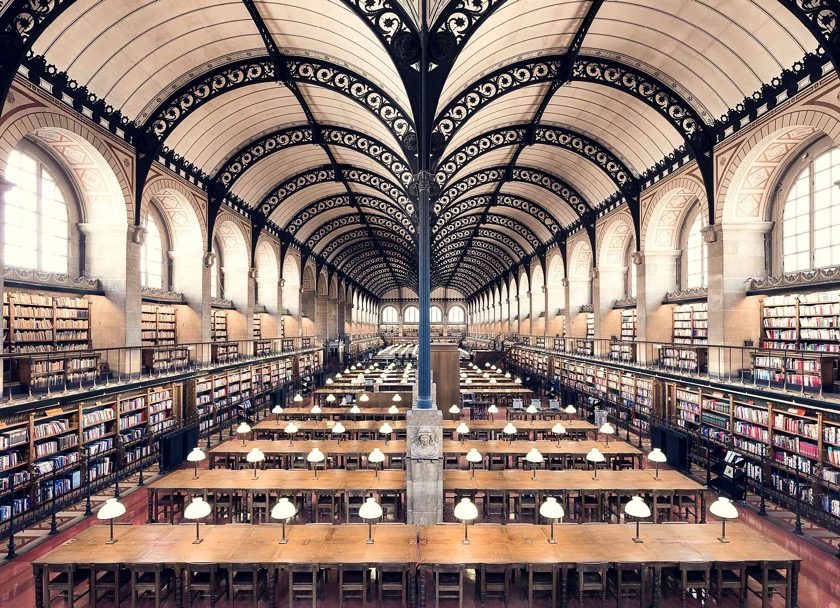 The reading room, in glass and metal, was designed by Henri Labrouste (the same architect who designed Salle Labrouste) and was completed in 1851. 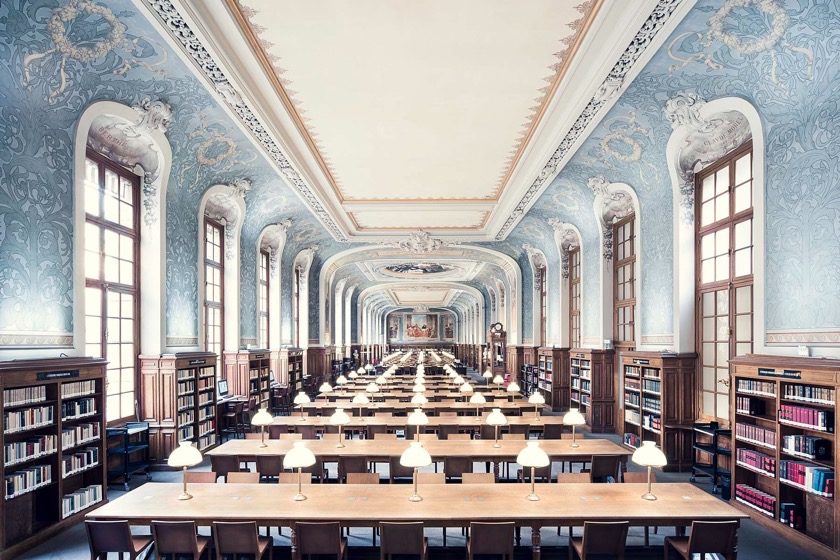 Bibliothèque de la Sorbonne. The Saint-Jacques Reading Room of the Sorbonne University was designed by Henri Paul Nénot and opened in 1901. 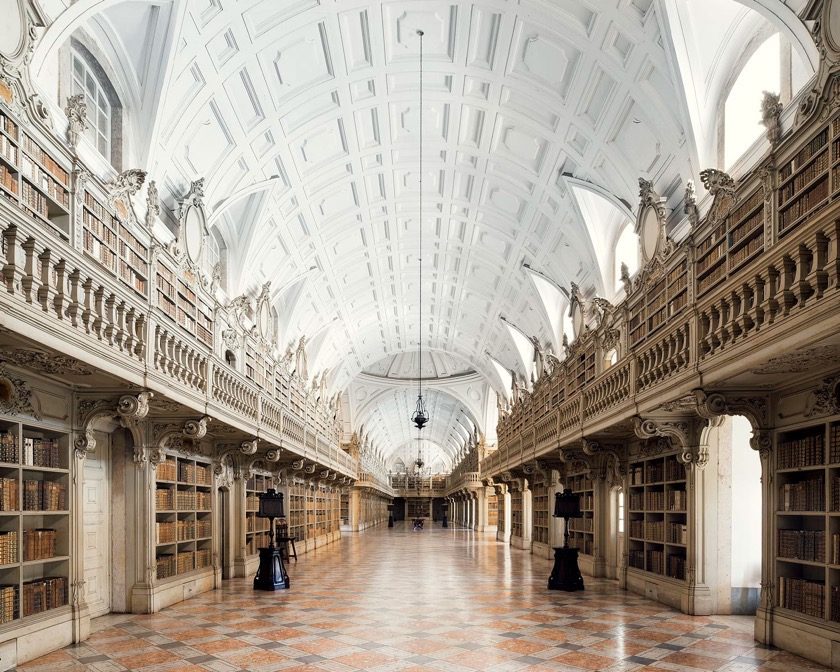 Palácio Nacional de Mafra. The neoclassical Palace of Mafra is located 28 kilometers from Lisbon. Its largest and most prestigious room is occupied by the library and reading room, where around 36,000 volumes are collected.

All images by Thibaud Poirier. Via My Modern Met.