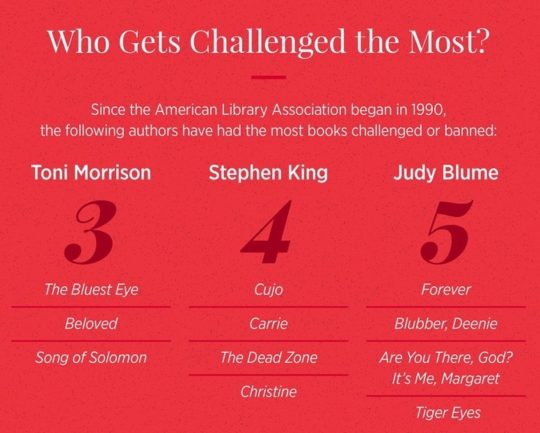 To celebrate Banned Books Week 2018, the team from Invaluable, an online platform for auctions and galleries, has prepared an infographic that takes a closer look at banned books in the United States.

The visual is based on yearly records provided by the American Library Association from years 1990 to 2016. The most important information is that only 10% of challenged books are banned.

A factor which makes it difficult to ban a book in America is the First Amendment to the Constitution. It prevents Congress from making any law prohibiting or abridging the freedom of speech and press.

The infographic lists top 3 reasons for book banning in American schools. You will also find here the top 3 authors with the biggest number of banned books since 1990 (Stephen King is not #1, it’s Judy Blume).

Click or tap the infographic to see it in full resolution. Make sure to check out the original post on Invaluable to read more details.

Keep exploring. We’ve got more infographics about books and reading: