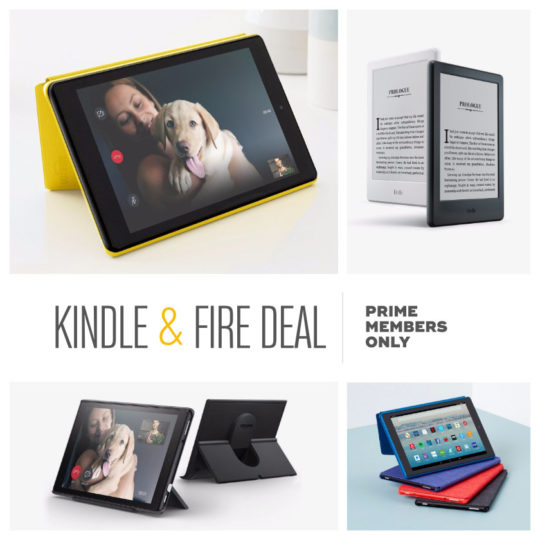 In this limited time deal, eight Kindle and Fire devices and bundles are featured / Images: Amazon

Such a deal in the middle of September is unexpected. We haven’t seen a sale that big running right after back to school shopping season.

The sale is available only for Prime members, and you can reach it via Amazon Gold Box, when you limit your search to Amazon Devices.

If you are not a member of Amazon Prime program, you can sign up today, and the moment later you’ll become eligible to take part in the promotion.

Kindle and Fire sale for Prime members – a complete list

As a reference, we will show the prices and availability during Black Friday & Cyber Monday 2017):

The sale also features three Kindle bundles, with price cuts reaching $60. Kindle Paperwhite Essentials Bundle is available in five colors, and includes the e-reader, Amazon’s original leather cover, and power adapter. Prime members can get it for $119.97 instead of . Please note that this bundle will be back on stock in early October.

The last item in this Prime-exclusive sale is Amazon Fire HD 10 bundled with Show Mode Charging Dock. You can get it for $189.99.

Make sure to read other articles about Kindle and Fire:

This Kindle and Fire sale for Prime members is almost as good as on Black Friday https://ebookfriendly.com/amazon-fire-kindle-sale-prime-members-september-2018/ via @ebookfriendly