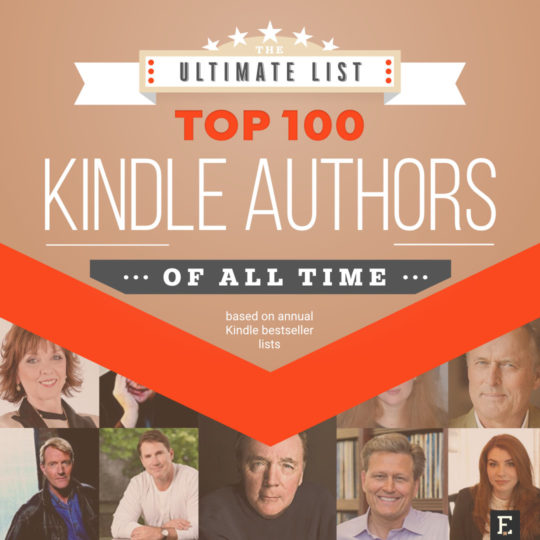 The best Kindle author of all time is James Patterson, with 10 books in the Top 100 ranking.

This list is a part of our extensive comparison of the best books and authors in the Kindle Store since the launch of the 1st-generation Kindle.

In the main post, you will find top 100 Kindle books of all time, Kindle Unlimited bestsellers, top 10 books in fiction and nonfiction, as well as top categories.

Let’s now take a detailed look at the chart putting together most successful authors who published their books in the Kindle Store between November 2007 and November 2017. It is an excellent material for analysis.

James Patterson is the clear winner. In the top 100 ranking of all time, there are ten books he authored or co-authored. The second best authors is David Baldacci, followed by Suzanne Collins.

Other big names in publishing, naming only J.K. Rowling, would easily join the club if they had decided to release their books in Kindle edition soon enough.

The chart also shows authors’ working style and attitude. James Patterson wins thanks to being a prolific writer. As much as 46 of books he had written or co-written landed on annual bestseller lists.

Suzanne Collins is on the opposite side of the landscape. She published three books from the Hunger Games series, plus a bundle collecting them in a single edition. All four publications were ranked very high on annual lists. And 100% of them landed in the main ranking of Top 100 Kindle books of all time.

Details you can compare in the ranking are:

The main rule for creating the rankings of the best Kindle books and authors of all time is based on points collected from annual bestseller lists. The #1 book gets 100 points; the last one receives 1 point. If a book is present on more than one annual list, its points are added.

The same rule is applied to authors. The more books an author managed to place in annual bestseller lists, the more points are counted.

Here are the rules for the ranking of the best Kindle authors of all time:

Top 100 Kindle authors of all time

Are you interested in the Kindle? We’ve got a lot more. Take a look at the recent posts:

Here are 100 best Kindle authors of all time https://ebookfriendly.com/100-best-kindle-authors-all-time/ via @ebookfriendly