Consumer Attitudes Toward E-Book Reading is a study conveyed by Book Industry Study Group (BISG) and Bowker Market Research. Since late 2009 it tracks changing habits and attitudes of users who have acquired a device to read ebooks.

The results from a first installment for 2013 report are shocking. For the first time tablets have become consumers’ preferred e-reading devices, overtaking dedicated e-readers. Now, 44% of e-book readers prefer a tablet. It’s 7% up, from 37% last August. At the same time, e-readers are a preferred device for 42% of respondents. In August 2012 it was as much as 49%. Angela Bole, BISG’s Deputy Executive Director, concludes:

Like so many other changes in e-book consumption, the move toward tablets developed very rapidly.

E-readers can only exists for e-reading. Tablets can be bought even if users are not planning to read ebooks on them. The worst news for the producers of dedicated e-reading devices is that the trend will continue to grow “as respondents’ intent to purchase a dedicated e-reader has dropped, while intent to purchase has remained consistent for tablets, at about 37 percent.”

The study results mirror current market situation. Barnes & Noble has seen a 26% drop in Nook business. Sales declined primarily due to lower device sales. The Verge reports that we might see more tablets and fewer e-readers from Barnes & Noble in the future:

What are your preferences? Are you going to buy an e-reader or a tablet to read ebooks? If you haven’t made up your mind, check out this simple questionnaire, that will help you make a better decision. 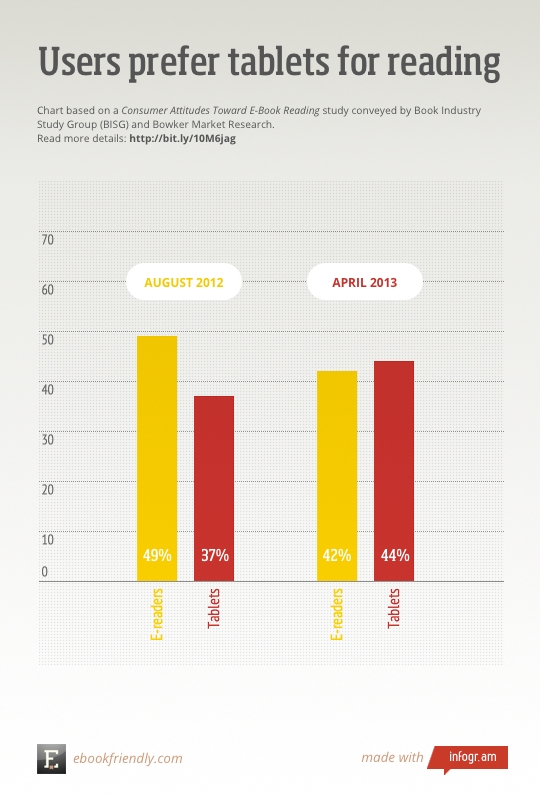