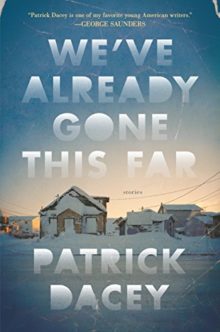 We’ve Already Gone This Far is an exciting debut collection by Patrick Dacey, a talented author already hailed as one of “favorite young American writers.”

The stories take us to a town like many towns in America, a place where people are searching for what is now an almost out-of-reach version of the American Dream.

Story by story, Dacey draws us into the secret lives of recognizable strangers and reminds us that life’s strange intensity and occasional magic is all around us, especially in the everyday.