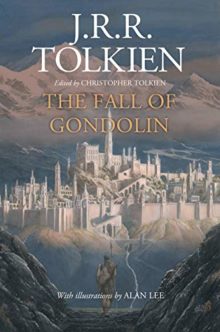 The Fall of Gondolin

The Fall of Gondolin is one of the original Lost Tales that J.R.R. Tolkien started writing in 1917 in an army barracks. The story was just published as a standalone book by HarperCollins.

The book follows two of the greatest powers in the world. Morgoth is of the uttermost evil, ruling over a vast military power from his fortress of Angband.

Ulmo, who is deeply opposed to Morgoth, is second in might only to Manwë, chief of the Valar. He is called the Lord of Waters, of all seas, lakes, and rivers under the sky.

Central to this enmity of the gods is the city of Gondolin, beautiful but undiscoverable.