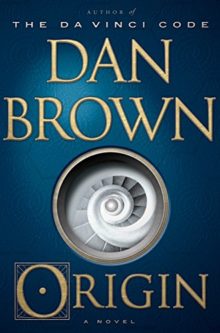 You were waiting for it. Robert Langdon returns in Dan Brown’s new stunningly inventive and entertaining novel.

Langdon arrives at the ultramodern Guggenheim Museum Bilbao to attend a major announcement—the unveiling of a discovery that “will change the face of science forever.” The evening’s host is Edmond Kirsch, a billionaire whose dazzling high-tech inventions and audacious predictions have made him a renowned global figure.

When the meticulously orchestrated presentation erupts into chaos, Robert Langdon is forced into a desperate bid to escape Bilbao. With him is Ambra Vidal, the elegant museum director who worked with Kirsch to stage the provocative event.