With the upcoming iOS 14, I wonder why Apple hasn’t changed that controversial, outdated rule that applies to in-app purchases.

After the launch of iOS 14 in fall 2020, iPhone users will be able to pick up an email and browser app of their choice. Apple’s Mail and Safari will no longer be default apps.

It’s a clear sign Apple is reconsidering their walled-garden strategy which forced iPad and iPhone to use Apple’s own apps.

One element of this outdated strategy is still there, however. Back in 2011 Apple updated rules regarding purchases made within apps from the App Store. The company decided to take 30% cut from any in-app purchase, no matter whether it was an ad-free version of the app itself, a service subscription fee, or a purchase of content from a digital platform (for instance, a movie, audiobook, or ebook). What’s more, all in-app purchases had to be finalized through Apple payment system.

Such a fee is fine (although way too high) if it is applied to the app itself (no matter whether it’s a paid version or subscription), but it’s unreasonable for content from digital media providers. Why should Amazon, Kobo, or Barnes & Noble pay Apple 30% for every ebook sold via their ebookstores? Apple’s move was clearly aimed at crippling competitors and give way to their delayed digital content solutions, such as iBooks Store.

It’s no surprise several platforms removed from their apps ability to purchase content. Users were forced to switch to a computer, buy an ebook, send it to an iOS device, and open it in a connected app.

The good news is that recently Apple started making some exceptions from the in-app 30% commission rate. In April 2020, the company allowed Amazon to use its own payment system for purchases made within a popular Amazon Prime app for iOS. In a matter of days, a new version of the app was released. It already included an option to rent or buy movies right within the app.

One thing Apple could do today, is reducing commission rate for content from other digital publishers to a level that would encourage them to bring back in-app purchases. And this time it should not be an exception but a rule.

When it comes to ebooks and audiobooks, Apple Books app is no longer delayed – it’s just different. It has its pros and cons, and I am sure many users will decide to stick to it after they try it for some time. There is no need to force them into the app.

Apple Books still comes preloaded on new iPhones, but since September 2016, you can remove it, if you are a dedicated user of Kindle Store or Google Play platform. But in the Kindle app, I can’t buy ebooks directly. I am not going to switch to Apple Books because of that, but I get angry every time I have to pick up a laptop to buy an ebook for my iPhone Kindle app.

For the time being, Apple earns zero on thousands of books being purchased every day in other digital platforms. Instead of getting 30% and earning $0, they should get 5% and earn something.

Hardware producers and digital content providers should give users the freedom of choice. The times locking users to platform’s default apps and solutions is over.

Users have the right to switch devices and services – in the end, they pay. Instead of forcing users into their solutions, digital content providers should focus on improving their platforms. Develop a digital platform with friendly interface, great and versatile content, reasonable prices, tailored subscriptions – and users will find you. 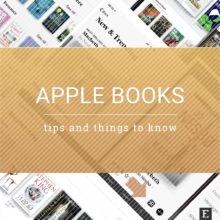 Top article
What's good and bad about Apple's native book-reading app for iPad and iPhone? Plus tips and tricks to make the most of it – if you decide to use it at all.

More about iPad and iPhone:

One thing Apple should fix in iOS 14 https://ebookfriendly.com/one-thing-apple-fix-ios-14-in-app-purchases/ via @ebookfriendly