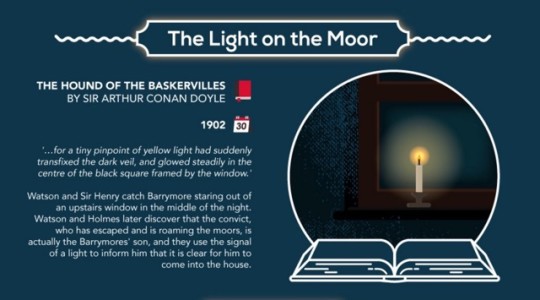 In the search for most memorable characters, quotes, and props from books, we are delighted to share the infographic developed by The Solar Centre, UK’s leading store offering eco-friendly sources of light.

The infographic called Memorable Lights From Literature, gives us a chance to take a closer look at most memorable lights from books.

You’ll see, among others, The Phial of Galadriel from J.R.R. Tolkien’s The Lord of the Rings, or The Light upon the Moor from The Hound of the Baskervilles by Sir Arthur Conan Doyle.

Each source of light is accompanied by a short description of its meaning and the role it plays in the book.

You may have read some of these novels; you may even have read and seen them all. But did you ever realize the significance of the lights, and how this contributed to the overall story?

Click or tap the image below to see it full resolution.

Literature’s most memorable sources of light (infographic) https://ebookfriendly.com/memorable-sources-light-books-infographic/ via @ebookfriendly