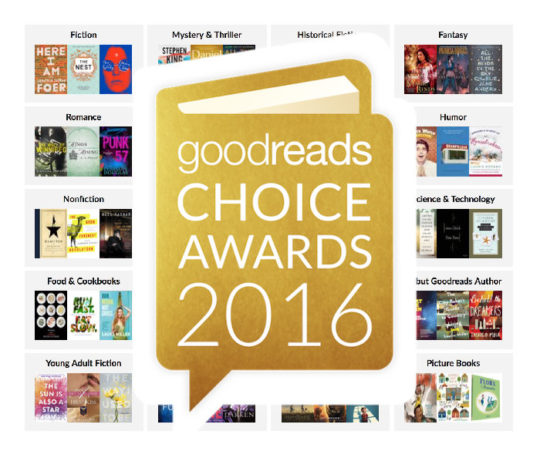 Don’t miss the chance to vote for your favorite book in the only major awards decided by readers.

For the eight time, readers from around the world can vote for the best book of the year in book awards organized by a social network for book lovers – Goodreads.

Voting in Goodreads Choice Awards 2016 started on November 1, 2016, and so far almost 2 million votes were cast!

You can vote for your favorite book in 20 categories, including fiction, mystery & thriller, fantasy, humor, non-fiction, history & biography, poetry, YA fiction, YA fantasy, and Debut Goodreads Author.

All that is required to cast a vote is to be a registered and signed up member of the Goodreads network. If you still aren’t a part of this flourishing community of people who love reading, Goodreads Awards is the best reason to join.

How to vote in Goodreads Choice Awards? Go to the awards’ landing page, pick up your favorite category, find the book you think deserves the award, and click on the “Vote” button underneath. You can leave one vote in each category. As there are three rounds of voting, you can vote as much as 60 times! Remember, to cast the vote you need to be signed in to Goodreads.

Three rounds of voting in Goodreads Choice Awards have the following timing:

How are nominees being selected for Goodreads Choice Awards? In total, there are 300 nominees in the first round of voting – 15 in each of the 20 categories.

The nominations are based on statistics. Goodreads analyzes millions of books added, rated, and reviewed by the users to evaluate the popularity and quality of the book. Nominees must have an average rating of at least 3.5 stars out of 5.

Which books are eligible for Goodreads Choice Awards? They have to be published in the United States in the English language. That includes works in translation and other significant rereleases. For Goodreads Awards 2016, the publication date must be between November 16, 2015, and November 15, 2016. Books published after that time will be eligible for the next year’s edition.

The winners of Goodreads Choice Awards 2016 will be announced on December 7, 2016.

How many of the books you’ve read this year are selected for Goodreads Choice Awards 2016? Which ones should get the award? It’s all in your hands. 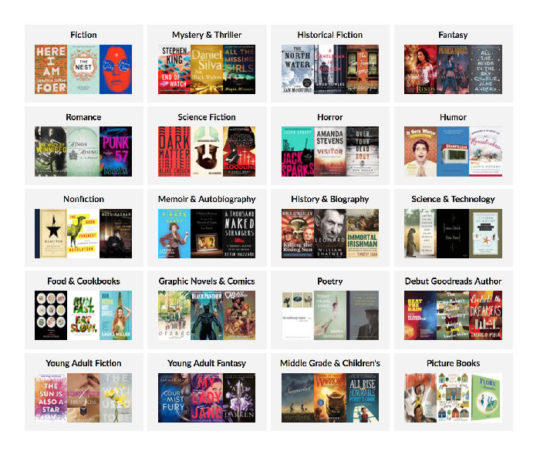 Best Mystery & Thriller – End of Watch by Stephen King, The Kept Woman by by Karin Slaughter, Before the Fall by Noah Hawley.

Best Historical Fiction – The Summer Before the War by Helen Simonson, The North Water by Ian McGuire, Homegoing by Yaa Gyasi.

Best Fantasy – All the Birds in the Sky by Charlie Jane Anders, Harry Potter and the Cursed Child by J.K. Rowling, The Paper Menagerie and Other Stories by Ken Liu.

Best Romance – One with You by Sylvia Day, Paper Princess by Erin Watt, The Hating Game by Sally Thorne.

Best Horror – The Nightmare Stacks by Charles Stross, Over Your Dead Body by Dan Wells, Lovecraft Country by Matt Ruff.

Best Humor – It Gets Worse: A Collection of Essays by Shane Dawson, The Girl with the Lower Back Tattoo by Amy Schumer, I’m Judging You: The Do-Better Manual by Luvvie Ajayi.

Best Nonfiction – The Geek Feminist Revolution by Kameron Hurley, Grit: Passion, Perseverance, and the Science of Success by Angela Duckworth, The View from the Cheap Seats: Selected Nonfiction by Neil Gaiman.

Best Memoir & Autobiography – Lab Girl by Hope Jahren, A Thousand Naked Strangers: A Paramedic’s Wild Ride to the Edge and Back by Kevin Hazzard, When Breath Becomes Air by Paul Kalanithi.

Best History & Biography – Leonard: My Fifty-Year Friendship with a Remarkable Man by William Shatner, First Women: The Grace and Power of America’s Modern First Ladies by Kate Andersen Brower, Hero of the Empire: The Boer War, a Daring Escape, and the Making of Winston Churchill by Candice Millard.

Best Science & Technology – Algorithms to Live By: The Computer Science of Human Decisions by Brian Christian, I Contain Multitudes: The Microbes Within Us and a Grander View of Life by Ed Yong, The Gene: An Intimate History by Siddhartha Mukherjee.

Best Food & Cookbooks – Appetites: A Cookbook by Anthony Bourdain, Skinnytaste Fast and Slow: Knockout Quick-Fix and Slow-Cooker Recipes for Real Life by DGina Homolka, Cravings: Recipes for All the Food You Want to Eat by Chrissy Teigen.

Best Poetry – Bitter Sweet Love by Michael Faudet, The Universe of Us by Lang Leav, Tales of a Receding Hairline by K.W. Peery.

Best Debut Goodreads Author – The Nix by Nathan Hill, Beat the Rain by Nigel Jay Cooper, The Summer that Melted Everything by Tiffany McDaniel.

Best YA Fiction – Symptoms of Being Human by Jeff Garvin, The Sun Is Also a Star by Nicola Yoon, The Serpent King by Jeff Zentner.

Best YA Fantasy & Science Fiction – A Torch Against the Night by Sabaa Tahir, Heartless by Marissa Meyer, My Lady Jane by Cynthia Hand.