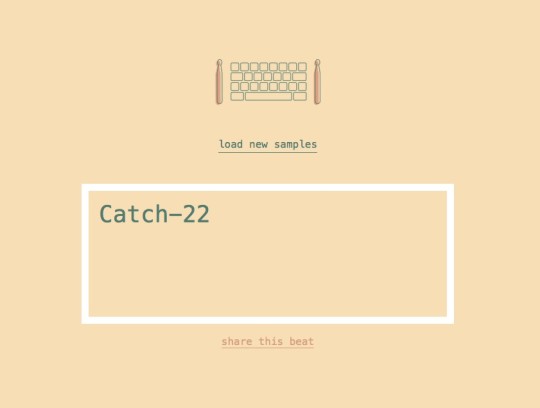 What would a title of your favorite book sound like if it was played on a drum set? You can check it out for yourself.

Typedrummer is an ingeniously simple website where you can write any text to hear how it sounds. Letters are being transformed into particular instruments from a drum kit.

This web-based fun tool was created by a Philadelphia-based developer and designer Kyle Stetz.

Obviously, most people start from typing their own names, but, hey, let’s do some test and check out how would famous book titles perform on stage.

You can choose from a basic drum set, but there is also an option to load and play a richer sample from the song “Fool” by Moon Bounce.

One tip from someone who practiced words-to-drums for the last hour. The shorter the title the better the rhythm, and the simpler the sounds.

If the title is long, it will produce brit-hop sequences, some of them interesting and flowing seamlessly, some simply disturbing.

Catch-22 offers a steady pop line. Pride and Prejudice is about emotions and uncertainty. For the pure funky style, use Moby-Dick. Dracula turns out to be a 80s ballad. Lolita is full of suspense.

Most interesting, however, is 1984. You’ll be surprised to hear how it sounds – or maybe not, having in mind what the book is about…

Famous book titles as played on drums: Life of Pi. ⇢ Play it.

Famous book titles as played on drums: Pride and Prejudice. ⇢ Play it.

Famous book titles as played on a drum kit https://ebookfriendly.com/famous-book-titles-drum-kit/ via @ebookfriendly