For many readers, electronic devices are much less comfortable for the eyes than print books. On the other side we get used to reading on computers, tablets and e-readers.

A study conducted by the team of researchers from Johannes Gutenberg University in Mainz, Germany, discovers one rather surprising preference: elder adults rate tablets as a medium with best readability. We prepared a simple infographic to visualize the results: 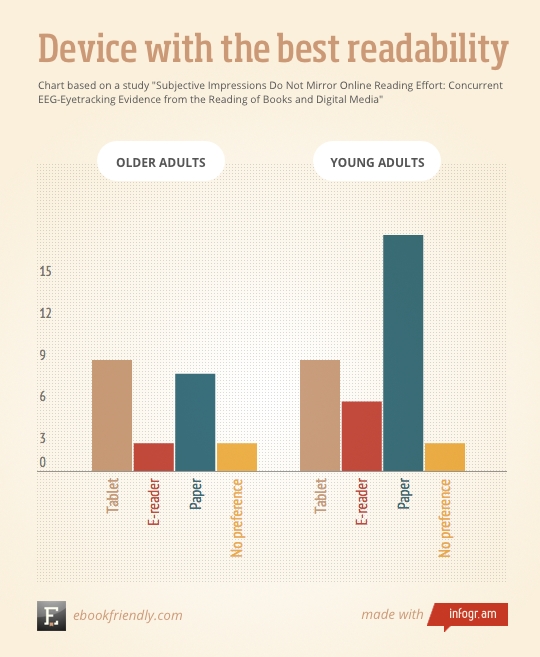 The group of older adults, aged 60 to 77, consisted of only 21 participants. Nevertheless, the results show that using the tablet improved speed and reduced effort compared to paper and e-reader. Reading a sample text on Kindle took around 28 seconds, on paper – 26.5 seconds. Switching to iPad saved as much as 4 seconds, compared to Kindle.

Researchers argue that the benefit tablets give is a backlight screen. Users can adjust brightness, the text is crispier and the contrast can be high – and this is what makes the difference.

We argue that these results can be explained in terms of the better text discriminability (higher contrast) produced by the backlit display of the tablet computer. Contrast sensitivity decreases with age and degraded contrast conditions lead to longer reading times, thus supporting the conclusion that older readers may benefit particularly from the enhanced contrast of the tablet. Our findings thus indicate that people’s subjective evaluation of digital reading media must be dissociated from the cognitive and neural effort expended in online information processing while reading from such devices.

The study used combined EEG (electroencephalography – recording of electrical activity along the scalp) and eye-tracking measures in order to test whether reading from digital media requires higher effort than print books.

Respondents in two groups, younger and older adults, read short texts on three different reading devices: a paper page, an e-reader (Kindle) and a tablet (iPad 2). Afterwards, they were answering questions while their eye movements and EEG were recorded.

As far as subjective judgements are concerned, both groups rate paper as the medium that gives the biggest pleasure of reading. However, for elder people tablet comes second, even before e-reader.

Study: for elder people tablets have better readability than paper https://ebookfriendly.com/elder-people-find-tablets-have-best-readability-study-says/ via @ebookfriendly