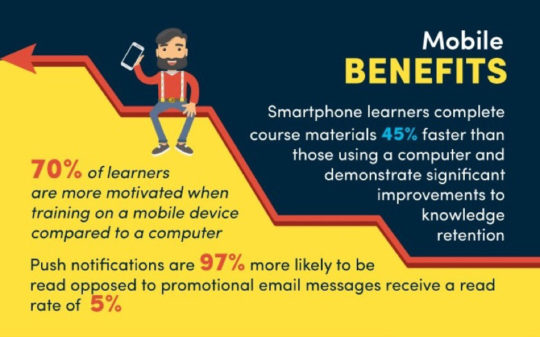 We all know it: mobile phones can be surprisingly helpful in learning.

You don’t need a Chromebook or a newest 9.7-inch iPad addressed to schools and education institutions to learn faster and more effectively.

All you need is a smartphone – which you most probably already have and keep it with you 24 hours a day, 7 days a week.

And all you need on your smartphone is a set of learning and reference apps, of whose some are free to use, naming only these education apps for iPhone.

Why should education institutions focus more on the benefits of mobile learning? You will find some answers in a new infographic created by Agylia, a company which develops learning apps and solutions for the mobile-ready world.

In the visual, you’ll find facts about smartphone usage, as well as figures about mobile learning. Examples?

Did you know that mobile learning market is estimated to reach $37.6 billion by 2020? Another interesting information is that as much as 70% of learners are more motivated when training on a mobile device compared to a computer.

Finally, the infographic takes a look at the potential of microlearning. For instance, 76% of employees are willing to complete microlearning courses outside of the office.

Are you interested in infographics about books, reading, and learning? Keep exploring: