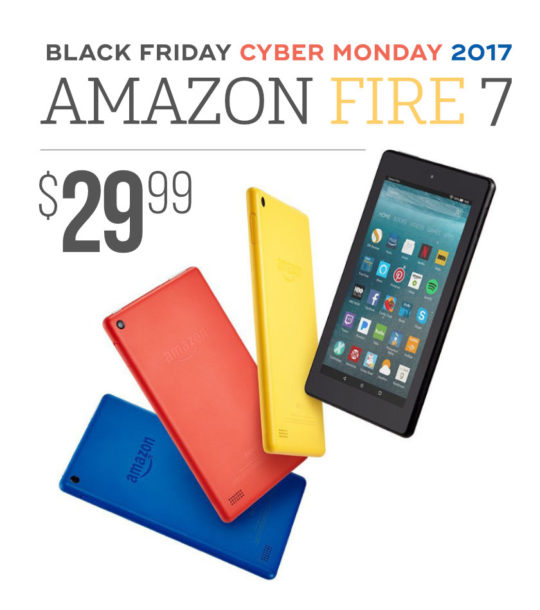 Amazon is teasing with deal prices for Kindle Paperwhite and Amazon Fire tablets to be offered this Black Friday and Cyber Monday.

During this holiday shopping season, Amazon may cuts prices to the lowest level ever seen.

In an email to CNET, the company has revealed some of the upcoming deals on Amazon devices, together with the sale launch dates.

The most significant news is that the 7-inch Amazon Fire tablet, released this June, will have the price cut down to $29.99. This is the lowest deal price on Amazon device ever offered. Last Black Friday and Cyber Monday, the previous-generation Fire 7 was offered for $33.33, which was a 33% discount.

The deal on Kindle Paperwhite is also going to be more attractive than last year. Now the plan is to offer the sale price at $89.99. During Black Friday and Cyber Monday, it was ten dollars more – $99.99.

It’s worth noting that such a low price for Kindle Paperwhite was observed during Prime Day 2017 – a special summer shopping event exclusive for the members of Amazon Prime subscription program.

What deals can we expect from Amazon this Black Friday and Cyber Monday? Here is what Amazon revealed in an email to CNET editors:

Obviously, much more products will be featured in Amazon Black Friday 2017 Sale Store, and these leaked deals are aimed at teasing customers and making sure they won’t start looking for the holiday sale in other online stores.

Although there are still almost three weeks until the Black Friday & Cyber Monday 2017 weekend, some of the third-party producers already offer their most popular items at highly reduced prices. And they are not even listed in Amazon’s official Black Friday store.

How to find them? Check out our detailed list of all most important Black Friday and Cyber Monday discounts on Kindle, Fire, iPad, and other tech stuff. We have put together not only deals on devices but also case covers, accessories, or subscriptions.

Keep exploring. Here are other articles about Kindle:

This Black Firday, the price of Amazon Fire 7 tablet drops to $29.99 https://ebookfriendly.com/amazon-reveals-black-firday-cyber-monday-2017-sale-kindle-fire/ via @ebookfriendly