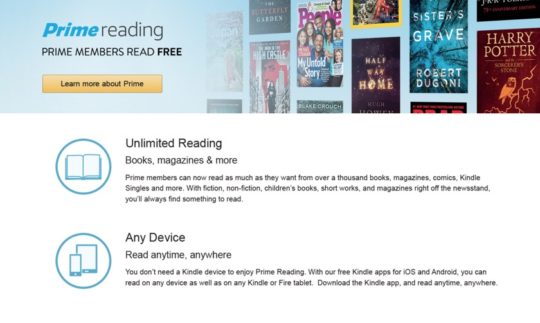 In the announcement, Amazon claimed to have on the list such books as Harry Potter and the Sorcerer’s Stone, Hobbit, or The Man In the High Castle, but they didn’t provide the link to the entire catalog.

I spent some time digging and there it is: the list of Prime Reading eligible Kindle books.

Please note that this list inlcudes only ebooks, and not magazines. You’ll find here about 1,000 Kindle ebooks, plus 180 Kindle Singles, and over 100 Kindle Short Reads.

By default, the list is sorted by “Featured,” which means most of the books on the top were released by Amazon imprints. As you’ll see in the screenshot below, Harry Potter didn’t make it to the first page of Prime Reading.

If you were attracted to Amazon Prime subscription because of this new feature, make sure to check out other Prime benefits for book lovers.