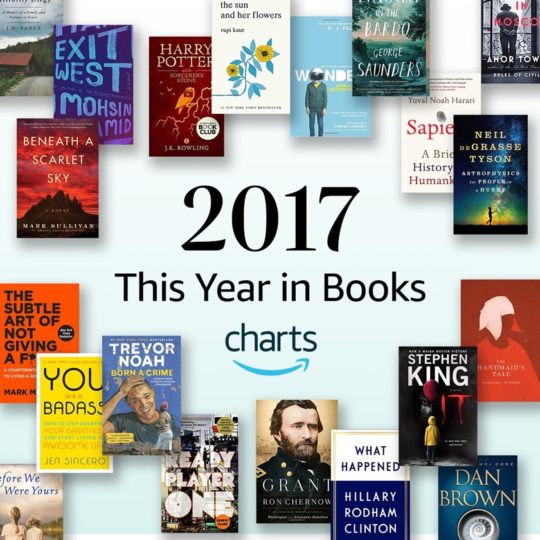 This Year in Books, powered by Amazon Charts, is an interactive visual with the most interesting books of 2017 / Image: Amazon

Are you looking for new books to read? You won’t find anything more entertaining than This Year in Books from Amazon Charts.

It’s a weekly bestseller list that shows the latest trending books across all reading formats: print, Kindle, audiobooks, and digital subscriptions. Each week two lists are revealed: most sold and most read books.

The biggest advantage of Amazon Charts is the data that helps analyze which books are flying into readers’ hands and minds. “Amazon Charts provides a rare glimpse into the real reading trends of thousands of book lovers.”

The weekly rankings are impressive, but you should check out the newly-released grand list powered by Amazon Charts.

Called This Year in Books the list is, in fact, an amazing interactive infographic full of book rankings, fun facts, and reading stats.

First of all, you can check out what books included in weekly lists, made it to the Top 10 rankings of the year.

The No.1 most-read fiction book of 2017 is, obviously, The Handmaid’s Tale by Margaret Atwood. This dystopian novel is included in many other lists, naming only Top 100 Kindle bestsellers of 2017.

Amazon Charts splits books into two major categories: fiction and nonfiction. The most-read nonfiction in 2017 is The Subtle Art of Not Giving a F*ck – Mark Manson’s self-help guide show us how to stop trying to be “positive” all the time so that we can truly become better, happier people.

Other things to explore? Top 5 most quotable books, top 5 unputdownable books, top 5 books most listened to on Alexa, book cover trends, most highlighted passages from Harry Potter books, you name it!

These Top 10 lists aggregate weekly results from Amazon Charts and reflect readers’ favorite titles since the beginning of the year. Both Kindle ebooks (including the ones read by Kindle Unlimited subscribers) and Audible audiobooks are counted.

Amazon’s Most Read Charts rank titles by the average number of daily Kindle readers and Audible listeners each. 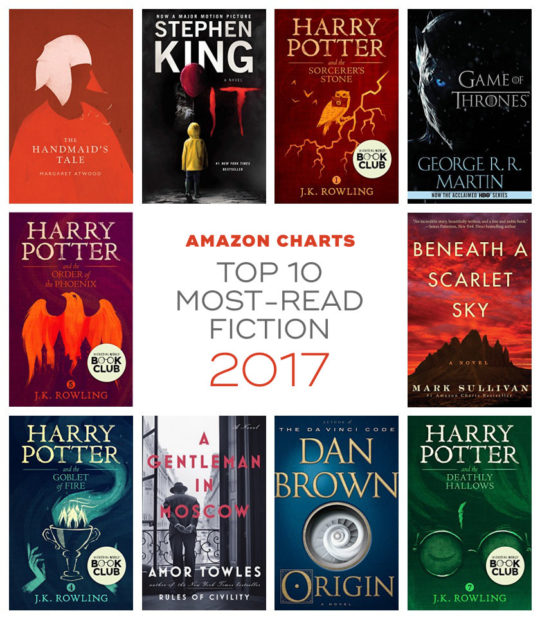 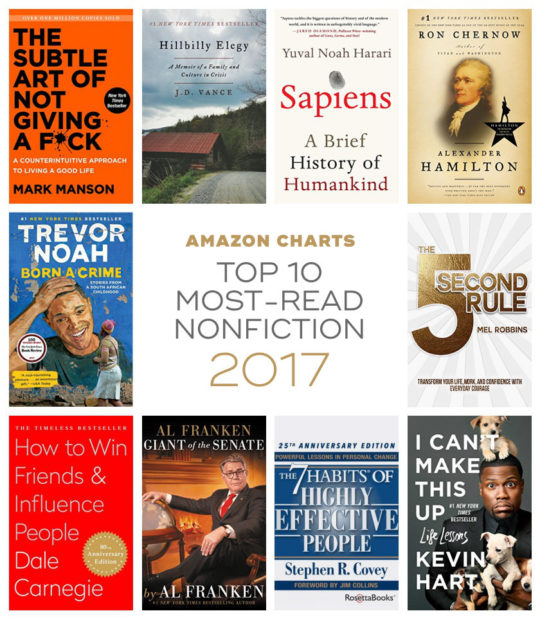 Top 5 books most listened to on Audible

Amazon Charts: top most read and listened to books of 2017 https://ebookfriendly.com/amazon-charts-2017-year-in-books/ via @ebookfriendly