There are three popular ways of adding personal files to book reading apps in iOS. The option to add own books via Dropbox is still there, but it’s harder to find.

Major update of Dropbox app, redesigned for iOS 7, made it harder to open epub or mobi files in relevant apps.

Previously it was easy – a pop-up window appeared informing the file couldn’t be opened by Dropbox, and listing all apps that were able to do that.

Not any longer. In the current update of Dropbox app, you’ll see a message “Couldn’t load file”. Looks like a dead-end, but it’s not. Now, the “Open in” feature is hidden behind Share menu. 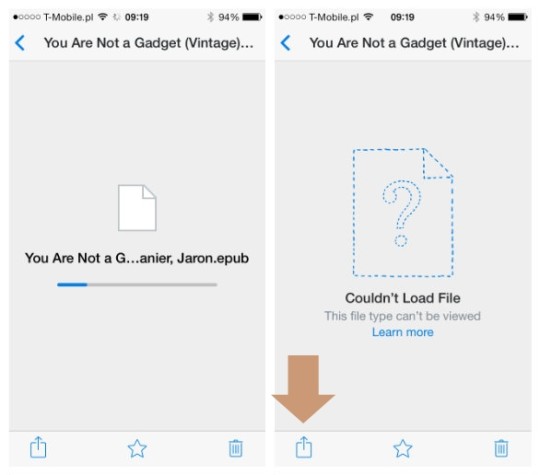 Tap on Share and locate the Open in transparent button that is easy to miss. The rest is the same as before. A list of apps will appear. Pick up the one you want to use. 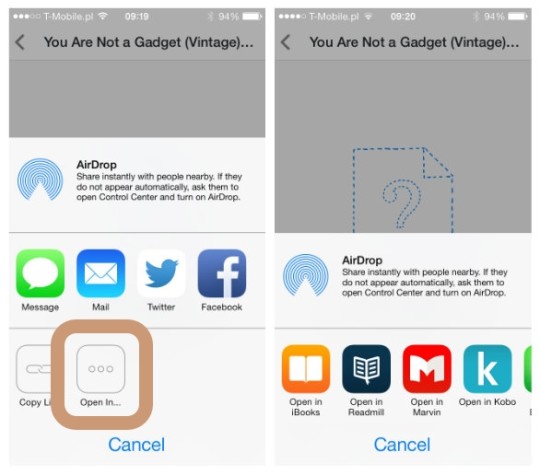 Having in mind the DRM mess caused by Adobe, it’s more reasonable than ever to abandon Adobe-guarded clouds like Kobo or Nook or Google Play and switch to a cloud service like Dropbox. The files are your own, and you have full control over them.

Dropbox, with apps for most operating systems, gives you access to your books from any device anywhere in the world (does it sound like Kindle or Kobo spoiler? It should).

Plus, if you want fresh new, and completely free ebooks from Project Gutenberg, you can add them to Dropbox with one click.

Have a minute? Check out more posts for iPhone and iPad users:

iOS: how to add own books via Dropbox (updated) https://ebookfriendly.com/add-own-books-via-dropbox-for-ios/ via @ebookfriendly