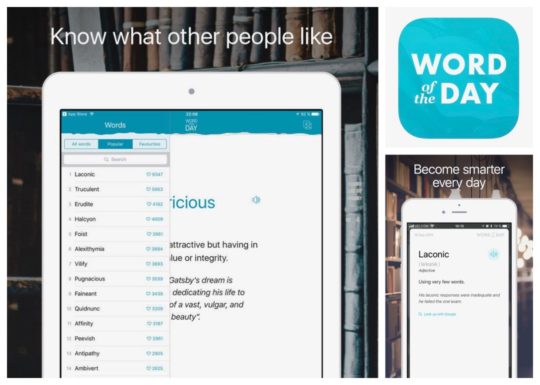 Learn a new English word a day with this dedicated, brilliantly designed application for iPad and iPhone.

If you are looking for a simple tool that will prompt you to learn English, the app that sends a notification with one new word a day is all you need to keep you on the tracks.

This feature is available in Dictionary.com and other learning apps, but a little application called,… surprise, surprise,… Word of the Day is exceptionally well designed and focused on just this one thing.

The app gives a short and simple definition of the word, accompanied by an example sentence. You will be able to see how many times other users favorited the particular word, and find more info on Google with just one tap.

The fun thing is that you can share the word with your friends by sending an automatically generated image with a crossword puzzle to Facebook, Instagram, and other services.

All previously released words of the day are available for you in the app’s archive. You can explore them randomly, alphabetically, or by date.

⇢ Word of the Day

Word of the Day is a simple iOS app that will prompt you to learn English every day https://ebookfriendly.com/word-of-the-day-app-ipad-iphone-learn-english/ via @ebookfriendly