If English is not your primary language, but if you want to read in it as much as you can, you will find this simple tip useful. The trick is really fast and is using the feature to look up reference in Google web search. You can translate words in Kindle app (iOS, Android, other platforms, too), but also in other e-reading applications that offer Google lookup.

“Sure,” you can say, “Why not using a built-in dictionary?” I use a dictionary by default, but sometimes a description in English is too difficult for me, and I can’t figure out a proper Polish word. In such cases ability to quickly translate this word to a mother tongue would solve the problem.

There are lots of translating apps for iOS, Android and any other mobile operating system. The problem is that sometimes it’s a couple of taps too far to use them. You need to switch to another application, type a word again (or paste it, if there was an option to copy it in the e-reading app). Then you have to switch back to the e-reading app.

How to quickly translate words in Kindle app

1. When you find a word you want to translate, highlight it, and at the bottom of the explanation window, tap on a Google link. 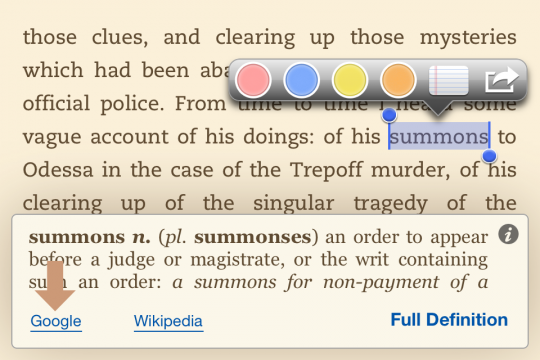 You’ll see a Google search page in an inline browser: 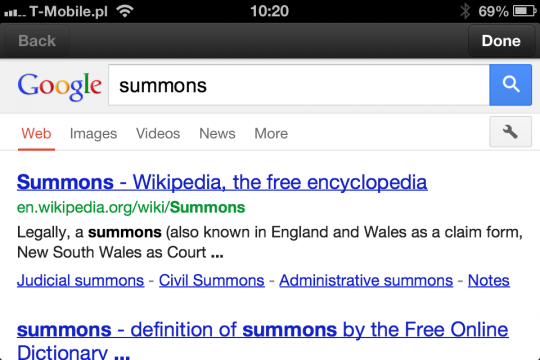 2. Now, here comes the trick. In a search box add two words that tell Google to find a translation. The phrase is “to Polish”, or “to Italian”, or “to Portuguese”, etc. Please note that it should be stated in English, not in your mother tongue. The other phrase that also does the job is “in Polish”, “in Italian”, etc. 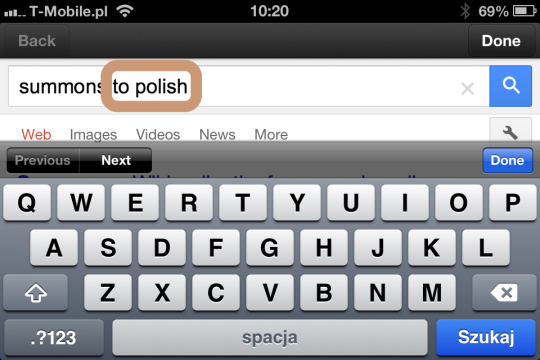 Tap on Search button and you’ll see a translation as on a screenshot below: 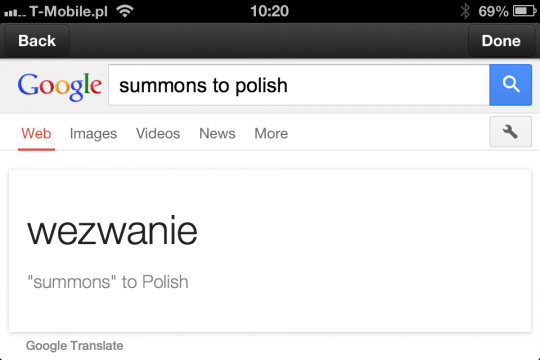 I told you it’s gonna be quick. As you see, you don’t have to go to a special Google Translate page. It’s just a matter of typing a few words. If you want to be even quicker in iOS, you can add the phrase (like in my case “to Polish”) to shortcuts. To do that, open Settings, then Keyboard, then scroll down to bottom and tap on Add New Shortcut.

Kindle app lets find a Google reference in an inline browser, so to close the search you just have to tap on Done button in the top right corner. I tested the Google trick in the iBooks, Kobo, and Bluefire Reader apps and it also work, but in the first two apps, the Define feature redirects to Safari, so you’ll need to go back to the e-reading app every time after the translation is being performed.

A good thing about Google Translate is that you don’t have to download to Kindle app the dictionary in other language (for instance a German one) if you want to look up for a word in German language. Google detects the original language, so that you can translate words from any language to any language.

In general, I’m amazed with how good is Google Translate. Combined with a very well designed and fast mobile interface it can be a solution to most of the translation tasks you have on a tablet or smartphone. No extra apps needed.

How to quickly translate words in Kindle app https://ebookfriendly.com/translate-words-in-kindle-app/ via @ebookfriendly

Most interesting short story collections to read in 2019