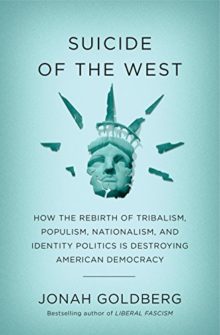 Suicide of the West

With his trademark blend of political history, social science, economics, and pop culture, Jonah Goldberg describes in his new book how the rebirth of tribalism, populism, nationalism, and identity politics is destroying American democracy.

At a moment when authoritarianism, tribalism, identity politics, and cults of personality are rotting our democracy from within, Goldberg exposes the West’s suicidal tendencies on both sides of the ideological aisle.