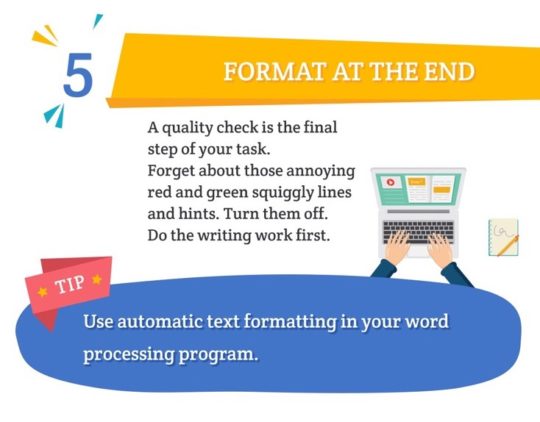 Every writer should set up a recurring reminder to look back into this infographic before starting the next NaNoWriMo challenge.

Created by the team from Custom Writing, an affordable online service that provides high-quality custom papers, the infographic is a simple and enjoyable way to learn the most effective ways to become a better writer.

The focus is put on helping you increase the writing speed. If you write faster, you have better chances to capture all the ideas which appear in your head – including these ingenious ones.

Some of the tips are quite obvious, for instance, leaving the formatting hell for the very end of the process. Some of the tips deal with time management, such as the Pomodoro technique. And some are designed to overcome distractions.

The tip I’ve found the most exciting is creating tasks and building dynamic connections between them. The idea is not to update a current to-do list, but create a new one every day. It will help you move forward. Most importantly, you will have a better picture of how the project evolves and where it requires attention.

Which of these tips are you already using? Which ones are you going to try?