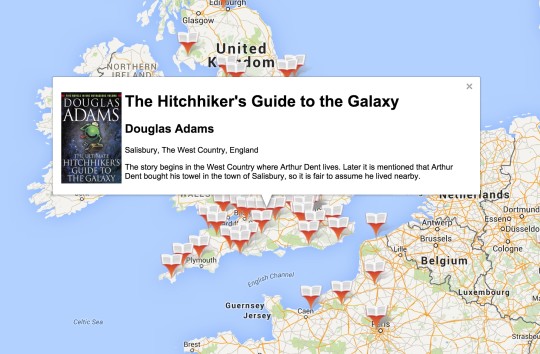 Google Maps Book Mash-up matches popular books with the locations they are set in.

This is one of the most exciting ways to explore new books to read. Rather than following a favorite author or genre, you can start from your favorite location.

They say reading a book is the greatest form of escapism – but where we escape to changes from author to author and story to story. You could visit Narnia, Westeros, or just the West End of London.

When you enter the map, you’ll see the entire globe covered with book tags. You can zoom it to the country or city, and click on a book tag to reveal the book details. Besides the cover and title, you’ll find the exact location, and a short info about the book’s plot.

You can also type the country or city in the search box in the top left corner to get the immediate results.

Some books are missing. For example, you won’t find James Joyce’s Dubliners in Dublin. However, you can suggest new books to the Love Reading team, using a simple online form.

Book Mash-up is another, and most creative, example how Google Maps technology can be used to promote books, bookstores and libraries.