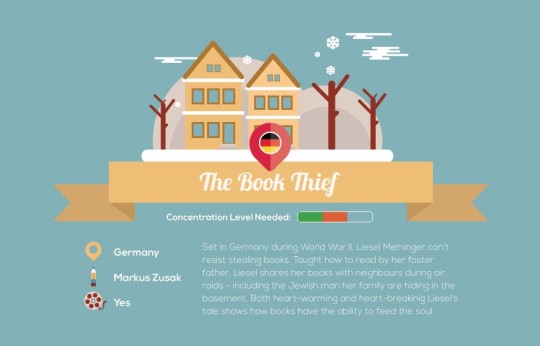 The new infographic is a great guide to pair holiday destinations with popular books.

The tourist guide doesn’t have to be the only book that tells the story about the place you’re heading for holiday.

Infographics that match books with places they are located are a great way to discover perfect summer books. We’ve seen a couple of great examples already (like the one from NeoMam Studios).

The new infographic, released by Fly Abu Dhabi, is both wonderfully designed and useful. It offers book recommendations for particular locations, but adds also the short description of the book and the level of concentration needed.

From classics like Don Quixote and A Room with a View, to contemporary page-turners such as The Wasp Factory and The Miniaturist, there’s a book for every destination.

And if one book is just not enough for two weeks of sunbathing and reading, make sure to check out our list of 2015 summer reads.

Click or tap on the image below to see it in full resolution.

There are many more infographics on Ebook Friendly:

The ultimate holiday reads by their location (infographic) https://ebookfriendly.com/holiday-reads-by-location-infographic/ via @ebookfriendly