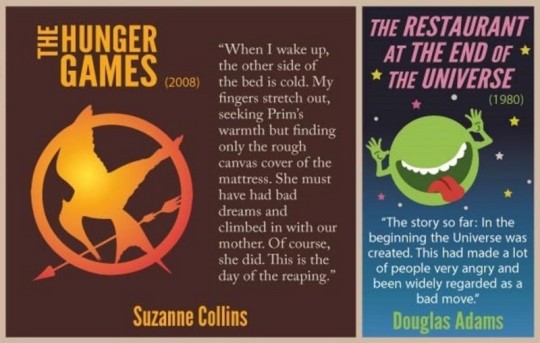 The first sentence or paragraph of a novel is often the author’s last chance to make a first impression.

Stephen King spends weeks, months, or sometimes years to craft first sentences of his novels. Why? Because the opening line should be tempting and powerful enough to make the reader want to keep reading.

First and last lines of novels are often the ones most adored by readers.

Scribendi, a professional proofreading and editing service for students and authors, has released a visual that puts together the most captivating first lines from famous books.

You’ll find here passages from over novels, including Fahrenheit 451, One Flew over the Cuckoo’s Nest, The Hobbit, or The Catcher in the Rye.

The first line is the author’s chance to make a first impression and to capture the imagination of the reader, and the very best books will keep the reader hooked from the first line to the very last line.

Check out the original post on Scribendi or click the infographic below to see it in full resolution.