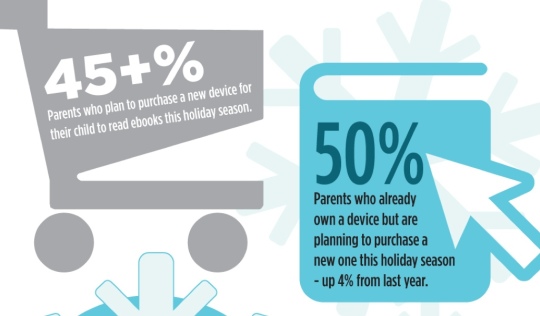 Digital Book World, a publishing news platform, has revealed highlights of the survey, conducted in cooperation with PlayCollective, a global strategy and research company.

As much as 45% of parents with children between the ages of 2 and 13 plan to buy a new device for their children to use in order to read ebooks.

Of those parents who already own a device, 50 percent are planning to purchase a new one this season, up 4 percent from last year, and more than half (58 percent) of these parents intend for the device to belong primarily to their child.

75% of parents plan to purchase new ebooks for their children this holiday season, up 2% from last year. The average spending is $26.14.

The complete results of the survey will be released at Digital Book World 2015.

Tap or click on the image to see it in full resolution.

45% of parents plan to buy an e-reading device for their kids (infographic) https://ebookfriendly.com/ereading-devices-for-children-infographic/ via @ebookfriendly