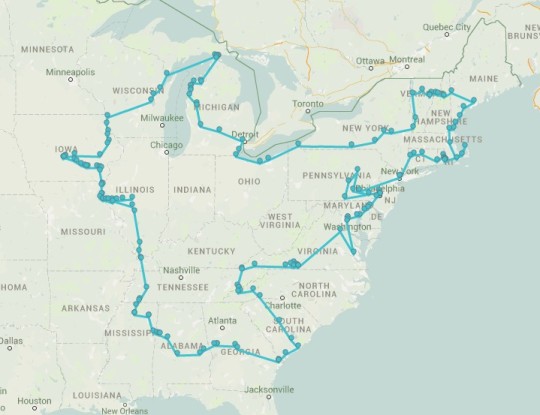 A Guide to Literary Road Trips is a project developed by Atlas Obscura, a website that lets you explore world’s most wondrous and curious places.

Richard Kreitner and Steven Melendez have collected over 1,500 locations found in American literature and placed them on an interactive Google Maps interface.

The map includes place references from twelve books. Sure, you can rediscover here all the spots from On the Road Jack Kerouac. You can also follow John Steinbeck’s Travels with Charley, or The Lost Continent by Bill Bryson.

To be included, a book needed to have a narrative arc matching the chronological and geographical arc of the trip it chronicles. It needed to be non-fictional, or, as in the case of On the Road, at least told in the first-person.

When you go to the interactive map on Atlas Obscura and click on a location, an info will be displayed with book’s title and a passage of the book that introduces the place.

1,500 literary places in America on an amazing interactive map https://ebookfriendly.com/epic-literary-road-trips/ via @ebookfriendly