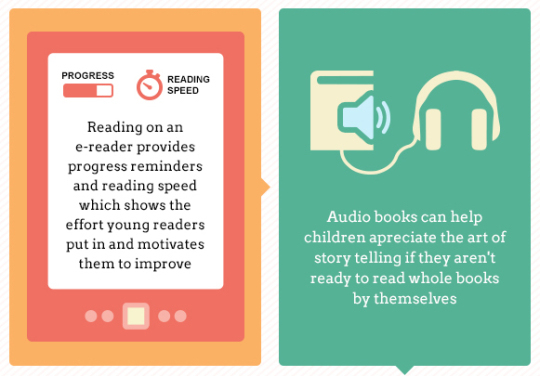 Reading is the best known way to train the mind to focus. That’s why it’s extremely important to keep kids love books.

These days, children get easily distracted by games or videos.

Just like we zipped through TV channels, our kids jump from one game to another and from YouTube video to another without even finishing.

In the long run it leads to shortening attention span. It will be more and more difficult to keep our kids’ attention on one topic or activity for longer than a couple of minutes.

We shared already several infographics and charts on how to encourage children to read. An infographic created by Love Reading 4 Kids is a great addition. It lists tips on how to draw – and keep – kids’ attention on reading.

Among twelve ideas to use, there is also the one that includes technology. Using the e-reader or a book reading app on the tablet can motivate children to read by providing reading progress and reading speed information.

And a nice poster hanging in a children’s room, reminding about how wonderful reading is, could also help.

Tap or click on the image below to enlarge it.

How to encourage children to read (infographic) https://ebookfriendly.com/encourage-children-to-read-infographic/ via @ebookfriendly