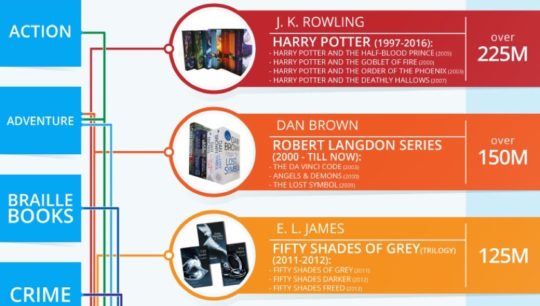 Book series with Harry Potter, Robert Langdon, and Christian Grey are on top of the list of contemporary book bestsellers.

It’s always exciting to see which books and authors are getting better than the others.

Such rankings help compare the popularity of the book with your own opinion about it. They are also a helpful tool to remind yourself of great reads and add them (finally) to a book wishlist.

We’ve already shared several infographics that put together most popular books on Earth. They all have one thing in common – list the best books of all time, which in the end means that most of these titles are literary classics.

What about famous books and book series released in the recent decades? What about Harry Potter, Katniss Everdeen, and Lisbeth Salander?

Finally, there is a visual that compares contemporary reads. Created by Elite Writings, the infographic lists 21 books and book series that were released in the 21st century (with two exceptions: Harry Potter and A Game of Thrones – first novels from these series were published in the late 90s).

Each title comes with the info about approximate sales and a date of the first release. The visual assigns books to popular categories, such as mystery, memoir, historic fiction, or Scandinavian noir.

And if you are interested in finding out, which titles and authors rule in the world of electronic books, make sure to check out out epic overview of best Kindle books of all time. It lists top 100 Kindle books, top 100 authors, best Kindle Unlimited reads, and more!

If you are interested in infographics about books and libraries, we’ve collected a huge archive. Here are just a few recent examples: