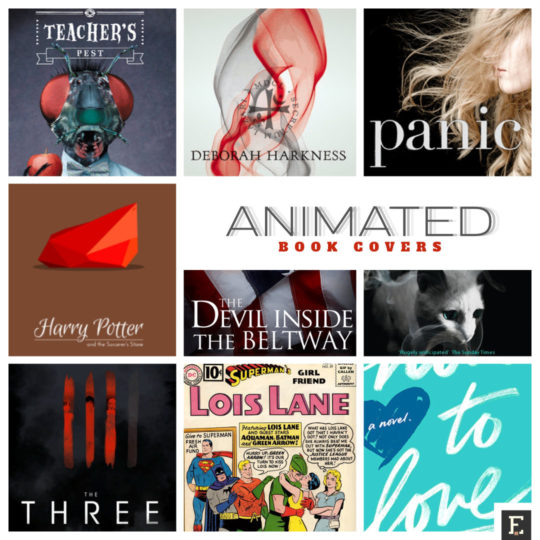 Animated book covers have just started to make its way into book design, but the examples below show a huge potential in this area.

Social networks like Tumblr and Pinterest support animated gifs, and it’s where the animated world is being shaped. And it’s where every book cover designer should be looking for inspiration.

Animated gifs let show a fact, a person, or an event, in a new light, and bring a new meaning to a story. They have a bigger stopping and sharing power than still images.

To make the cover spread around the web – isn’t it what every book author dreams about?

Most remarkable examples are not official book covers designed by or for original publishers. They are designed by fans and are either animated variants of original covers or alternative cover ideas.

The fact that Google made it easier to find animated gifs, by adding “animated” to a list of filters in image search, will spread the good work and encourage designers to create new ones.

The moment any major online bookstore accepts animated gifs as a format for displaying book covers will mark the beginning of the whole new cover design business.

The examples below are a teaser and an inspiration, but they also say: Hey, designers, get ready, it’s coming sooner than you think. 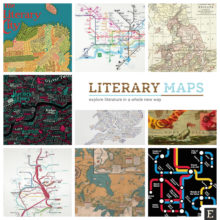 Animated book covers of Lovecraft Middle School series. These designs are by far the best and most advanced examples of animated book covers. They look like being shot with a moving camera that was changing its angle, but it’s not exactly what has happened.

Designer Doogie Horner and photographer Jonathan Pushnik took only two photos of each character: “before” and “after”.

Next, Ron Fladwood used an image editing software to turn these two shots into a sequence of 12 images, adding movement and detail to the transformation. ⇢ Credits and more info.

Animated cover of Doctor Sleep by Stephen King. This subtly animated cover was a part of pre-launch promotion for the sequel of The Shining.

The cover was revealed in late April 2013 and featured the cat, Oscar, which was King’s early inspiration for The Shining. The cat could predict the deaths of terminally ill patients by sitting on their beds.

The animation was a first step to draw attention to the cover design of the UK edition. The layout soon became interactive – here is a live example (mouse over the image to reveal interactive elements).

A cover of Mr Mercedes. The new novel by Stephen King is coming out in June 2014. Again, its animated version is a part of the book cover release.

The book is being published by Hodder & Stoughton and this publisher is one of the first ones to include animated covers to a collection of book marketing tools. Another example follows.

The Three by Sarah Lotz. A simple yet intriguing animation very well describes a new thriller for fans of The Shining Girls, The Passage and Lost. It’s one of the most stylish animated book covers so far. ⇢ Credits and more info.

Animated YA book covers. The designers from Epic Reads, a one-stop destination for the teen literature of all kinds, spent long hours (and had a lot of fun) to bring movement to the original artwork of selected books.

The entire list is available at Epic Reads. The books showcased above are:

Bristol Short Story Prize Anthology Vol 7. Most of the animated book covers available on the web are made for science-fiction, fantasy, or mystery novels – and therefore have the style common for these genres.

The example above shows that animation is relevant for every book category. The cover was created by a Bristol-based illustrator Harry McKenzie, and was an entry to a Bristol Short Story competition.

Comic book covers. All these hypnotizing animations were created by a graphic designer and cartoonist Kerry Callen (more examples here), and are based on original covers of:

The Strange Case of Dr Jekyll and Mr Hyde. A classic novella by Robert Louis Stevenson is reimagined by an artist and cover designer Mina Bach.

I’m not sure about the colors and typography, but the idea of the animation is excellent. ⇢ Credits.

The Devil Inside the Beltway by Michael J. Daugherty. The cover is an example of animation successfully applied to a non-fiction book. With a topic like this, you don’t need more than the eyes that are watching you.

When you visit the author’s webpage, you’ll see the animation in action, as it’s placed in the sidebar together with a static version. Which one grabs your attention?

Chitty Chitty Bang Bang Flies Again by Frank Cottrell Boyce. It’s quite obvious children’s books are naturally born for animated covers. Above you see one of the earliest examples of animated book covers. It was designed in 2011 by Macmillan Children’s Books fiction art director, Rachel Vale.

In a press release, the creator said: “The possibilities in animating existing print covers are endless, and we are only at the beginning of a very, very exciting journey.” ⇢ More info.

An animated version of a book cover of Taipei by Tao Lin. Here is another example of using animation in pre-launch book marketing.

The cover was designed by Cardon Webb and was widely discussed on the web. ⇢ More info.

Alternative, animated comic book covers. These covers, designed by ABVH, take advantage of the digital context. Why should the cover has the title and any other text, if all these elements can be placed next to it? Plus, the style has a great cinematic feel, bringing a new dimension to the comic stylistics.

Five covers featured above are for:

Once published they became extremely popular on the web, drawing a lot of attention to the potential animation could bring to book cover design.

Do you have some more time? Why don’t you check out other lists: