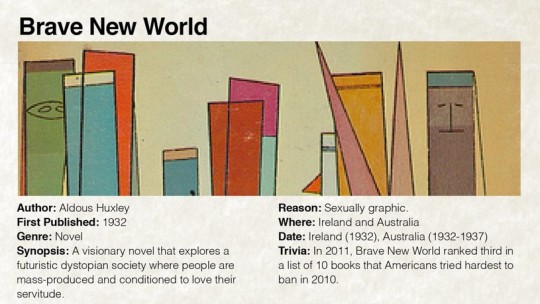 Banned Books Week is held from September 21 to 28 this year. This infographic will surely be one of the most useful materials to spread the word.

Prepared by Datadial for Lovereading, the site that helps readers find next books to read, it lists most popular books that at some point, and in some countries, were banned.

Each book comes with a summary of the plot, the date of a first release, and most importantly – the reason to ban it.

There are books in the chart that you wouldn’t believe were banned. Just have a look at Alice in Wonderland. In the 30s of the last century, the Chinese Censor General thought attributing human intelligence to animals was “an insult to humanity”, and that children should be protected from the negative influence of the book.