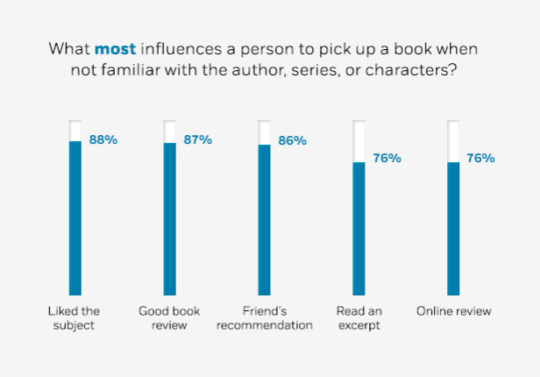 Most readers find new books to read using social networks, such as Goodreads and Facebook, according to a new survey.

In digital times, do we still rely on newspaper or magazine reviews when looking for new books to read? How influential are social media in the book discovery process?

One factor doesn’t change over time. It’s recommendations from family and friends that are most influential when deciding which book to read next. 81% of the surveyed readers have admitted it.

How do we connect with our friends and family? It’s not that easy to define these days. Some of them we meet in real life. Other relations are limited to social networks.

When you take a look at other sources of book recommendations, you’ll see that it’s mostly about social media. It’s where our friends – real or virtual – are.

Goodreads is followed by reviews in traditional media (49%), and Facebook (46%). Print advertising is helpful for only 23% of readers.

These proportions change with age. The younger the reader the bigger the influence of social media. Book reviews and print ads become more relevant as readers age.

Visit Geek Updated – a place with tips and tricks for geeks in a hurry.