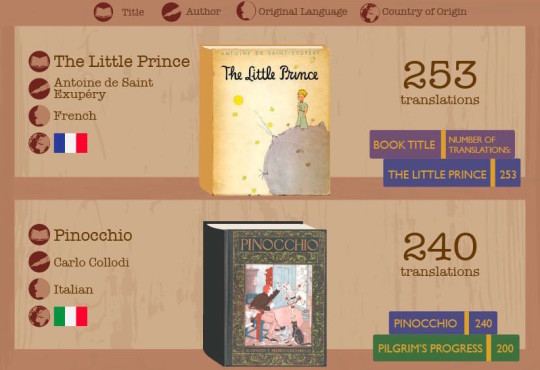 Some books convey messages so universal and timeless that they can be admired regardless the language and culture differences.

The team from a translation company 7 Brands have designed the infographic depicting 50 books with the biggest number of translations.

Among the fifty titles, you will find the highlighted books – with more detailed information than just the number of translations. The accompanying info will also show you the author, the original language, and the country of origin.

According to the infographic, the most translated book in the world is The Little Prince by Antoine de Saint-Exupéry. It was translated 253 times (multiple translations to the same language count in).

Which book is on the third place? It’s not Harry Potter. It’s not Alice’s Adventures in Wonderland. It’s not Fairy Tales by Hans Christian Andersen.

The third most translated book in the world is The Pilgrim’s Progress from This World, to That Which Is to Come, a Christian allegory written by John Bunyan in the 17th century.

You’ll find a full list of sources on the 7 Brands blog.