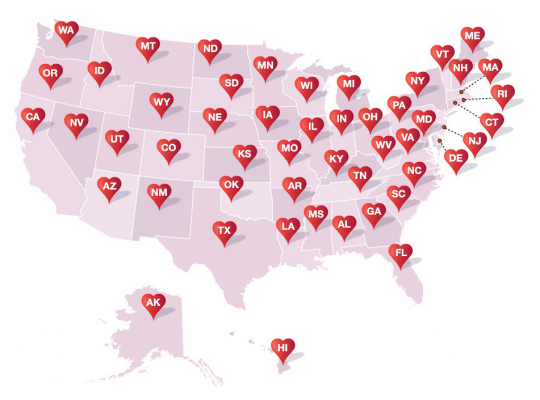 Looking for something to read during Valentine’s season? Amazon has released an interactive map for everyone in love… and in love for great books.

Together with the annual list of Top 20 Most Romantic Cities (Knoxville took the first place for the second year in a row), Amazon has added a new feature this year: 50 Great American Love Stories – an editorially chosen list of essential reads about love in all its forms, state by state.

The map includes classic tales of romance like Gone with the Wind and The Age of Innocence, together with modern classics like The Fault in Our Stars by John Green, or Gillian Flynn’s controversial thriller Gone Girl.

If you’ll click on a heart you’ll be presented with Amazon editors’ picks, set in every state of the union.

These diverse picks explore love in all its forms, from classic novels of romance and consuming passion, to twisted (and sometimes true) tales of love gone wrong, to stories that delve into the complex but enduring bonds between family and friends. All of them illuminate the mysterious chambers of the human heart.

Here are some examples:

Arizona: The Host by Stephenie Meyer
Love ventures into alien territory with this romantic meeting of three minds in just two bodies.

Florida: Their Eyes Were Watching God by Zora Neale Hurston
This 1937 masterwork broke boundaries by showing the deep humanity of the lives and loves of black women.

Indiana: The Fault in Our Stars by John Green
Tragedy and comedy collide in this heartbreakingly marvelous story of first love against the odds.

Mississippi: Cat on a Hot Tin Roof by Tennessee Williams
In this Southern gothic classic, the sensual Maggie the Cat howls in frustration at her husband’s repressed desire.

Missouri: Gone Girl by Gillian Flynn
Stuffed with spite, deception, and revenge, this neo-noir classic is an anti-love story for the media age.

Oklahoma: The Grapes of Wrath by John Steinbeck
As they flee the Dust Bowl, Ma and Pa Joad’s steadfast dignity sustains their family, and Rose of Sharon’s final act is a profound lesson in love.

Virginia: Love and Hate in Jamestown by David A. Price
John Smith establishes the first English colony in the New World and finds love with spirited Indian princess Pocahontas.