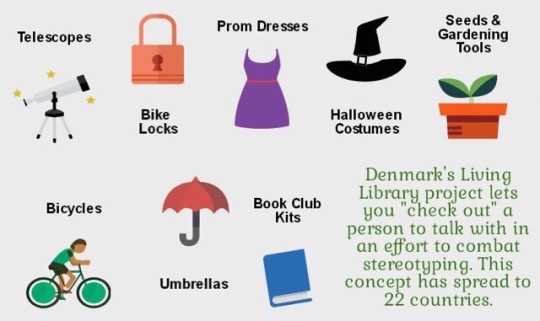 Libraries are not about borrowing books any longer. They are cultural centers that try to serve local communities in the best possible way.

And to answer the needs of communities, many libraries around the world let their patrons borrow not only books, ebooks, videos, or games.

Amy Shaw and Jaclyn Rosansky have prepared for ProQuest, a company that provides solutions and apps for libraries, an infographic called “Unusual Library Things.”

It lists such items as prom dresses, car seats, or ice cream makers. There are even libraries where you can check out actual people or even dogs!

So, for all you librarians and library lovers out there, enjoy! And the next time you drive past a library, stop, go inside, and explore because it offers much more on the inside than you might expect.

The visual was prepared using the online infographic creator Piktochart. Click or tap on it to enlarge.

Check out more infographics about libraries:

50 unusual things you can borrow from libraries (infographic) https://ebookfriendly.com/unusual-things-borrow-libraries-infographic/ via @ebookfriendly