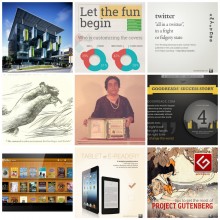 2013 was a year when ebooks stopped conquering print books. The also stopped being only a book business topic. They started to become an inseparable part of mass culture.

There are millions of book geeks around the world. Some of them are in love with electronic books – and they probably have already stumbled our site.

The posts listed below are the most interesting stuff created by Ebook Friendly team: infographics, lists, or anything else that became popular online and originated from our site.

6 fascinating book machines before the Kindle 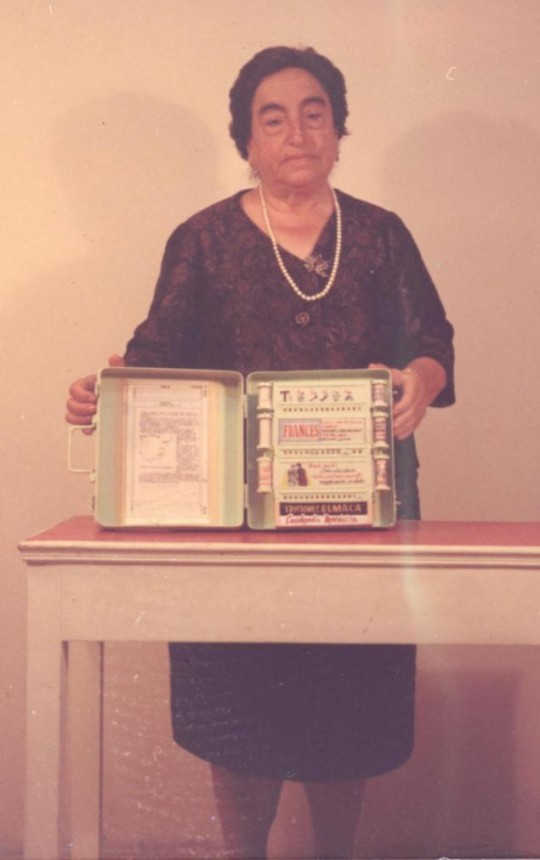 The launch of the first-generation Kindle is a clear milestone in the evolution of the book. For the first time the book in a form different from the one set up by Gutenberg 600 years earlier, was heralded by Oprah Winfrey.

However, Kindle is a result of earlier inventions. The history of improving books, making them more accessible and convenient, is much longer than that.

These six devices (and not a single one noticed by Oprah) perfectly show that making books more advanced was always on our minds.

From 16th century Book Wheel to Steve Job’s NeXT computer from 1988, they are all inspiring to do more. 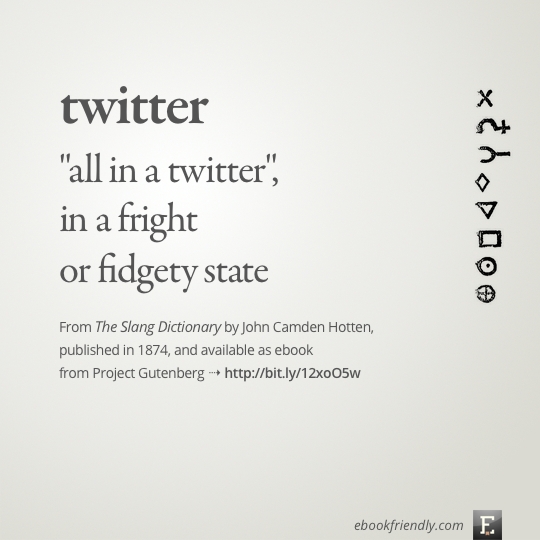 The word “twitter” is not new. In The Slang Dictionary written by John Camden Hotten and published 140 years ago, its meaning was as in the image above.

Other phrases unexpectedly define “pin”, “poll”, or “button”. I was able to find these words, because the book was digitized by Google, and is available for free from Project Gutenberg. Thanks to that it’s possible to search for specific words inside a book.

8 tips and tricks to get the most of Project Gutenberg 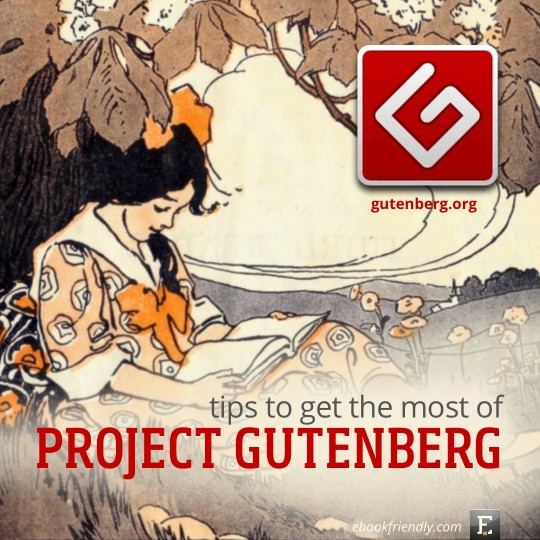 Speaking of Project Gutenberg, if you enter the world of ebooks, sooner or later you’ll realize we all should be thankful to this single site, that started the ebook engine long before the Kindle.

Established in 1971 by Michael S. Hart, Project Gutenberg offers over 40 thousand free ebooks that entered public domain. This brief description doesn’t even touch all the beauty PG has to offer. To get most of it, you can go through the list of tips and tricks. 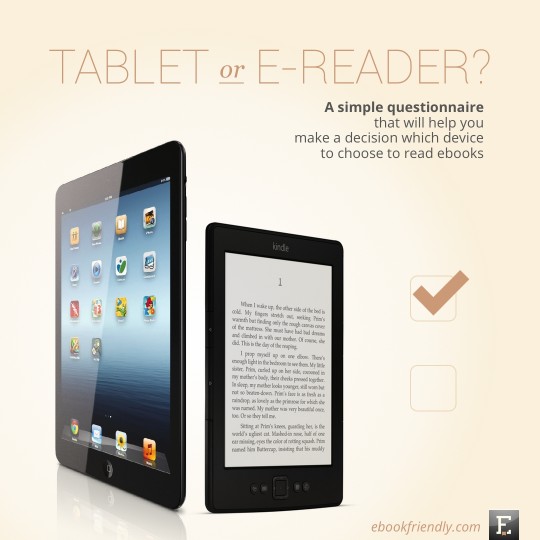 Many users make an essential mistake of not recognizing own preferences. They buy iPad, because they like it, or they buy Kindle because a neighbor has it.

First thing to do is to decide whether you need a tablet (any tablet) or e-reader (any e-reader). This questionnaire will get you much closer to the right answer.

A quick guide to reading books on Samsung Galaxy Tab 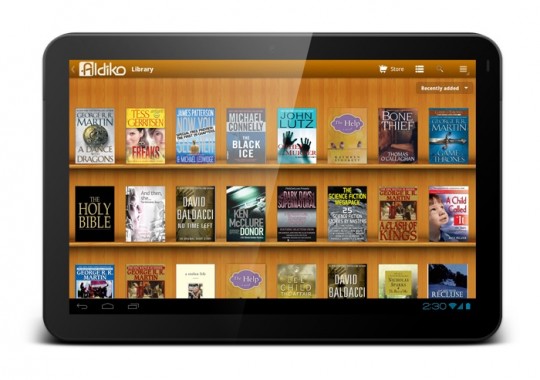 Users of the iPad or Kindle feel comfortable. When they don’t know something they can find the answer in a second on the web.

It’s far more difficult to learn about how to read books on other devices. Samsung tablets are popular, but apparently not as popular as iPads.

This post with simple tips that would turn a Samsung tablet (and smartphone, too) into a powerful reading machine, was among most popular posts visited from Google search.

35 free images from classic books, ready to use and remix 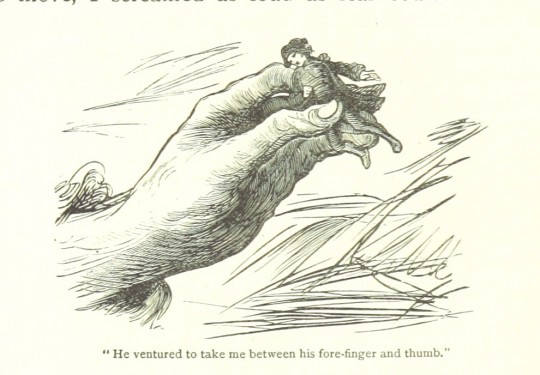 In December, The British Library has released over 1 million public domain images on a Flickr profile, encouraging users to use and repurpose these great illustrations.

On the surface it sounds boring. Old images? Who cares about them! Well, that’s not true. They are not only perfectly mastered, but very often they bring back iconic situations and moods, like the one from Gulliver’s Travels by Jonathan Swift, show above.

For your convenience we listed 35 great images from famous classic novels, including Pride and Prejudice, The Adventures of Sherlock Holmes, or Jane Eyre.

Who is customizing tablet and e-reader covers (infographic) 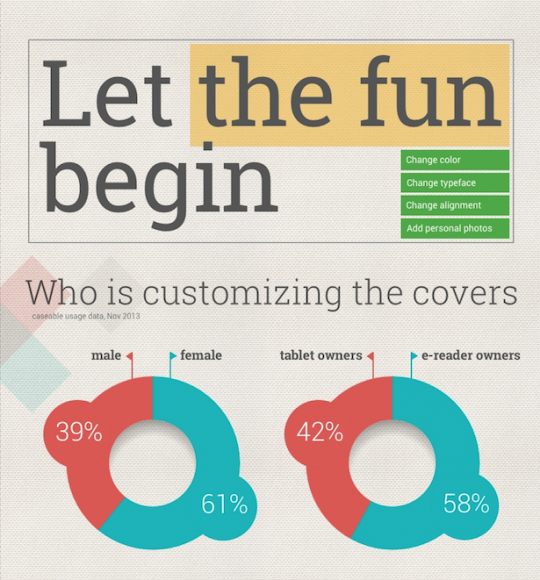 Ebooks become a part of the culture – although they are invisible files sitting on a disc of a computer, tablet or e-reader.

What helps show us the love for digital reading is the cases in which we dress e-reading devices.

Together with Caseable, a top destination for customized covers for smartphones, tablets, e-readers and laptops, we created a fun-to-explore infographic that shows users’ preferences in personalizing covers and sleeves. 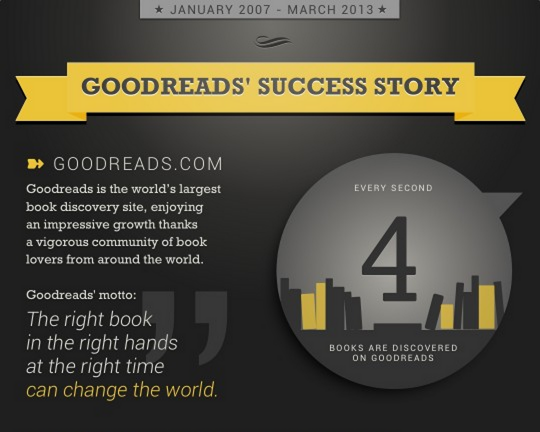 Another home-made infographic describes the most popular book recommendation site, Goodreads, at the time of the greatest glory.

In March, the news hit that the site was sold to Amazon. The infographic documents all the achievements of Goodreads’ community before the site lost its independence.

20 mesmerizing modern libraries from around the world 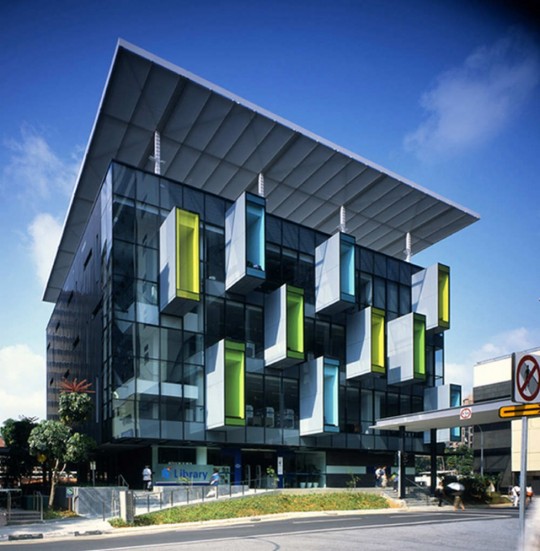 We share a lot of stuff about libraries, and this post that lists modern libraries around the world was one of the most visited in the entire 2013.

From The Bishan Public Library in Singapore, to Turku Public Library (Finland), to Thomas Fisher Rare Book Library in Canada, libraries are adapting to changing conditions, and doing better than anyone could expect.

We’re going to update the post soon with twenty or thirty new libraries, so stay tuned (and please give us recommendations!).

Check out other lists (and fee free to share them with your friends and followers!):

The best posts on Ebook Friendly in 2013 https://ebookfriendly.com/top-ebook-friendly-2013/ via @ebookfriendly