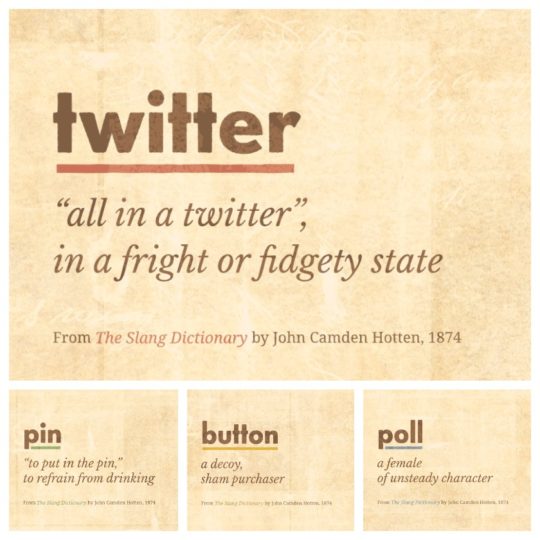 Popular terms of the internet era were already a part of the language in the 19th century. You’ll be surprised to find out what they meant.

Do you know what “pin” is according to a slang dictionary from 1874? Used in an expression “to put in the pin,” it means “to refrain from drinking.”

Written 140 years ago by John Camden Hotten, The Slang Dictionary: Etymological, Historical and Anecdotal, is a tremendous catalog of mostly forgotten slang words and phrases, that are cool enough to bring them back to our technology, hashtag-driven world.

Interestingly, some of these words, like “twitter,” “button,” “poll,” or the above-mentioned “pin,” are being used widely, but their 19th-century meaning is rarely decoded.

The dictionary was first issued in 1859, and republished by London’s Chatto & Windus in 1874, and later in 1913. It was digitized by Google Books and added to Project Gutenberg online ebook catalog. It’s available for free in many ebook formats, including epub (Nook, iBooks, and Kobo) and mobi (Kindle).

In a review of the dictionary, H.T. Buckle said: “Many of these words and phrases are but serving their apprenticeship, and will eventually become the active strength of our language.”

The slang from the past can be a great alternative to how the contemporary language is being shaped by social media. The words from the past might not always carry the original meaning, but they may be recreated to describe what’s new in our life.

Let’s take the word “e-fink.” In 1874 it meant “a knife.” The word, however, might be a great description for high-resolution e-ink display that offers extremely sharp picture. And this is just a drop in the sea of possibilities!

Once again, one the most tremendous benefits of ebooks speaks very loudly. We wouldn’t be able to access many great publications from the past, if they weren’t digitized and became available online on sites like Project Gutenberg or Internet Archive.

article derisive term for a weak or insignificant specimen of humanity

devil’s books a pack of playing-cards; a phrase of Presbyterian origin

pin “to put in the pin,” to refrain from drinking. From the ancient peg tankard, which was furnished with a row of pins, or pegs, to regulate the amount which each person was to drink. Drunken people are often requested to “put in the pin,” from some remote connexion between their unsteadiness and that of a carriage wheel which has lost its linch-pin. The popular cry, “put in the pin,” can have no connexion with the drinking pin or peg now, whatever it may originally have had. A merry pin, a roysterer

gentleman of three ins –that is, in debt, in danger, and in poverty

poll a female of unsteady character; “polled up,” means living with a woman in a state of unmarried impropriety. Also, if a costermonger sees one of his friends walking with a strange woman, he will say to him on the earliest opportunity, “I saw yer when yer was polled up”

button a decoy, sham purchaser. At any mock or sham auction seedy specimens may be seen. Probably from the connexion of buttons with Brummagem, which is often used as a synonym for a sham

four-eyes a man or woman who habitually wears spectacles

school a knot of men or boys; generally a body of idlers or street gamblers. Also, two or more “patterers” working together in the streets 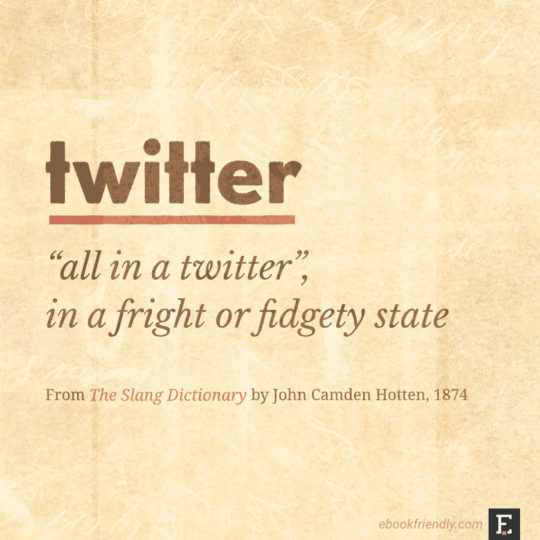 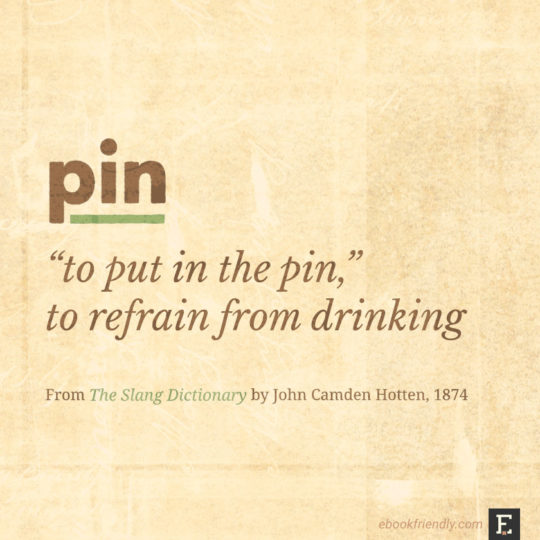 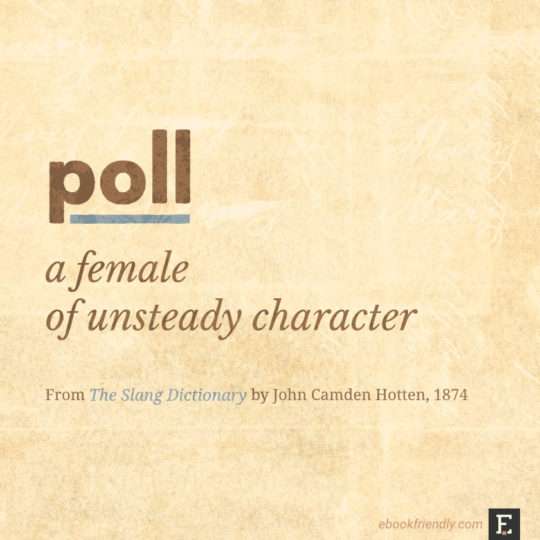 Keep exploring. Here are other posts we recommend:

This is what the words “twitter,” “pin” and “button” meant in the 19th century https://ebookfriendly.com/the-slang-dictionary-1874/ via @ebookfriendly