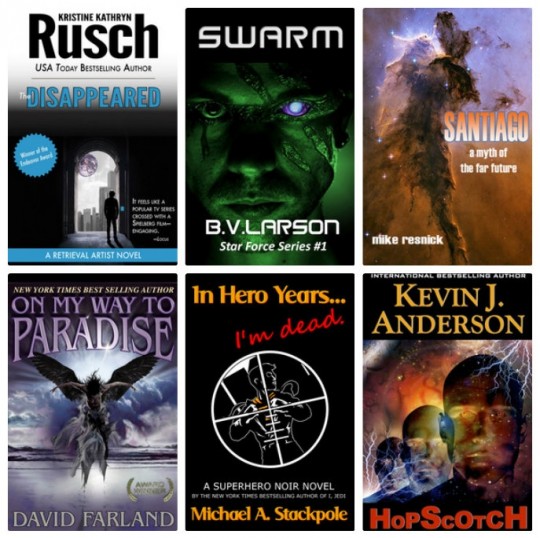 If you are the lover of science-fiction this may be the best idea to get great read for the entire summer.

StoryBundle, our favorite site that regularly releases bundles of fantastic ebooks for which you can set up your own price, is back with a Sci-Fi Bundle.

The bundle is curated by the bestselling sci-fi author Kevin J. Anderson, who wrote more than 100 books and sold over 23 million copies in 30 languages. The bundle includes one of his best novels Hopscotch.

The six titles in the Sci-Fi Bundle are:

The minimum price to pay is $3. StoryBundle has added a very interesting info to the price-adjusting bar, which states what is the current average price. For the new bundle, at the time of writing this post is was $11.24.

You can get two bonus titles (that will make 8 books in total), if you pay a minimum $10 for the bundle. These titles are The Stars in Shroud, one of the early novels of a sci-fi master Gregory Benford, and High-Opp, a novel by Frank Herbert, which was never published before.

Check out options include PayPal, but also Google Wallet and Amazon. You can also use gift cards and send someone a code that they can redeem for any collection showcased in the future.

What makes StoryBundle so wonderful is that you can also decide whether you want to donate 10% of the money you pay to charity. You can support Mighty Writers or Girls Write Now.

The books from StoryBundle are DRM-free, in epub and mobi formats, so you can read them basically on every e-reader and in every e-reading application. Why wait?

Suppose you could switch bodies with another person. What exciting new experiences would you choose to explore? What forbidden desires would you indulge?

Suppose someone stole your life? Stole your body? How far would you go to get it back?

Hopscotch is a pure adrenaline thriller of hijacked identities, elusive motives, and deeply buried secrets. Four friends on a journey through a futuristic world where body-swapping is commonplace and the very definition of humanity has been changed: one an artist who wants to experience every aspect of life, one a seeker looking for her soul, one an inadvertent murderer who has to swap from body to body, always on the run … and one the friend who must hunt him down.

The Disappeared is Flint’s very first adventure, the story that turns him from a police detective in the Armstrong Dome on the Moon into a Retrieval Artist.

In a universe where humans and aliens have formed a loose government called the Earth Alliance, treaties guarantee that humans are subject to alien laws when on alien soil. But alien laws often make no sense, and the punishments vary from loss of life to loss of a first-born child. Now three cases have collided: a stolen spaceyacht filled with dead bodies, two kidnapped human children, and a human woman on the run, trying to Disappear to avoid alien prosecution. Flint must enforce the law—giving the children to aliens, solving the murders, and arresting the woman for trying to save her own life.

But how is a man supposed to enforce laws that are unjust? How can he sacrifice innocents to a system he’s not sure he believes in? How can Miles Flint do the right thing in a universe where the right thing is very, very wrong?

Pay what you like for the great science-fiction bundle from StoryBundle https://ebookfriendly.com/storybundle-sci-fi-bundle-summer/ via @ebookfriendly