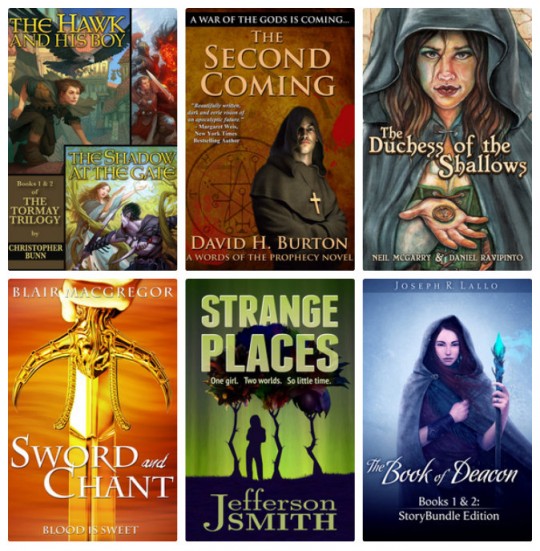 StoryBundle is an awesome service where you can get a bundle of ebooks from great authors for the price you set up by your own. There is one ebook collection featured at a time. Yesterday the new set of books was released: Indie Fantasy Bundle.

Our authors have created vast and sophisticated worlds that any reader would love to explore, with magical apocalypses and vast landscapes of history and legend. And whether you prefer dragon companions or djinn, supernatural schisms or looming evils, secret societies of thieves and spies or epic clashes between ancient rivals, this is the bundle for you.

Just a reminder that the service now offers gift cards. If you buy such a card, you will be able to send someone a code that they can redeem for any collection showcased on StoryBundle in the future. Codes never expire, so gift recipients can keep it and decide for themselves when they want to redeem it. What’s more, all gift cards are bonus-enabled. That means that bonus books (usually two extra titles) will be included when gift recipient will redeem the code.

You can check out with PayPal, Google Wallet, or Amazon. If you don’t want to miss new bundles, sign up for email notifications.

You’ll get two bonus books, if you’ll pay more than $10 for the pack.

All the major benefits of StoryBundle are listed below:

Get quality reads
We select works from a few excellent indie authors to bundle together in one convenient package.

Pay what you want
You decide how much these fantastic indie books are worth to you. If you can only spare a little, that’s fine! You’ll still get access to basic pack.

Give to worthy causes
Bundle buyers have a chance to donate a portion of their proceeds to charity.

Receive extra books
If you beat our bonus price, you’re not just getting basic pack, you’re getting bonus books as well.