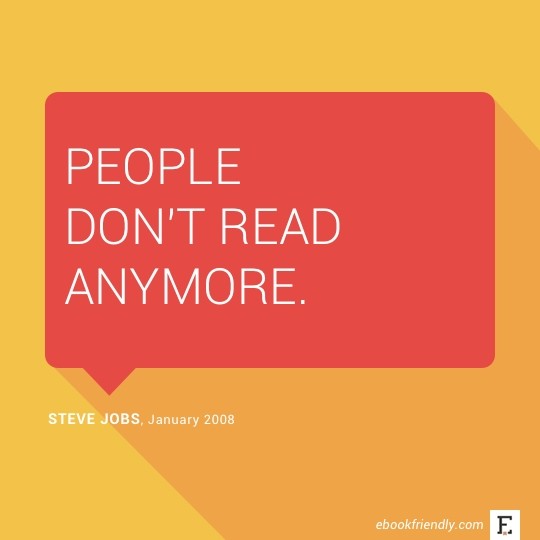 The long-expected Apple event begins right now. 7-inch iPad Mini, and a huge update to iBooks and iBooks Store are going to be announced today.

It’s the best time to bring back a thought about reading Steve Jobs shared with two columnists from The New York Times, John Markoff and David Pogue, right after the introduction of MacBook Air at the Macworld Expo, on January 15, 2008.

Regarding Apple’s competition, and Amazon in particular, Jobs said that Kindle would go nowhere because Americans have stopped reading.

Sure, it’s not one of the most important quotes from Steve Jobs, but it very well explains why Apple’s e-reading ecosystem was introduced as late as in 2010, with the introduction of the first-generation iPad. For the three years, since 2007, people were reading on their iPhones despite Jobs’ belief, using such legendary applications as Stanza (which was, by the way, bought by Amazon).

It’s good that Apple in the end seriously attempts to take the hearts of book lovers. The only question is whether it’s not too late for Apple to call it revolutionary.

Steve Jobs about reading, in the interview for The New York Times in 2008 (quote) https://ebookfriendly.com/steve-jobs-about-reading-quote/ via @ebookfriendly