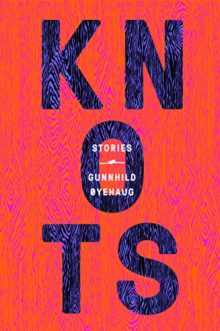 Gunnhild Øyehaug is one of the most celebrated Norwegian writers. In 2004 he published Knots for the first time. Now it’s available in English, in a translation by Kari Dickson.

The collection includes very concise stories as well as longer reads. They range from the surreal to the oddly mundane, and prod the discomforts of mental, sexual, and familial bonds.

A young man is born with an uncuttable umbilical cord and spends his life physically tethered to his mother; a tipsy uncle makes an uncomfortable toast with unforeseeable repercussions, and a dissatisfied deer yearns to be seen.

Full of characters who can’t help tying knots in themselves and each other, the stories by Gunnhild Øyehaug make the world just a little more strange.