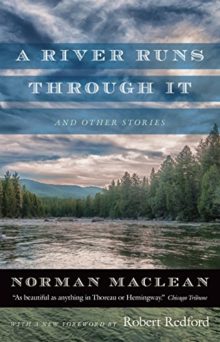 A River Runs through It and Other Stories

“A River Runs through It” is a classic novella by author Norman Maclean adapted in 1992 for the big screen by Robert Redford, starring Brad Pitt and Brenda Blethyn.

First released in 1976, together with two other semi-autobiographical stories (“USFS 1919” and “Logging and Pimping and ‘Your pal, Jim'”), the story follows Maclean’s relationship with his brother, and is considered a classic of the American West.

“It is a world populated with drunks, loggers, card sharks, and whores, but also one rich in the pleasures of fly-fishing, logging, cribbage, and family.”

Now you can get this classic collection in a new elegantly redesigned edition, with a foreword by Robert Redford.

Short stories: A River Runs through It and Other Stories – Norman Maclean https://ebookfriendly.com/short-stories-a-river-runs-through-it-and-other-stories-norman-maclean/ via @ebookfriendly