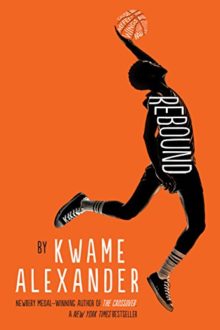 The story goes back in time to visit the childhood of Chuck “Da Man” Bell during one pivotal summer when young Charlie is sent to stay with his grandparents where he discovers basketball and learns more about his family’s past.

Rebound is novel in verse with all the impact and rhythm readers have come to expect from Kwame Alexander.