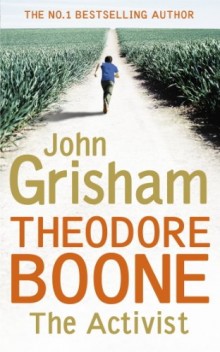 Theodore Boone, young lawyer, has had a lot to deal with in his thirteen years, everything from kidnapping to murder.

But he’s come through it all and, with the law on his side, justice has always prevailed.

Sometimes, though, the law doesn’t seem so just. His friend Hardie Quinn is about to have his family home bulldozed to make way for a bypass. Hardie is not the only one affected: other homes, businesses and schools lie in the path of the road. Theo has to tell his friend the bad news: for once, the law isn’t on his side, and there’s very little anyone can do to end the destruction.

Theo joins the campaign to stop the road. But when he stumbles on a terrible secret about the corrupt men behind the plan – a secret it is illegal for him to know – Theo must figure out how to keep the developers from breaking the law… without breaking it himself.

‘”If you aspire to turn your children into lawyers who will keep you in your old age, John Grisham’s Theodore Boone, his first novel for young people, might be for you.” –Sunday Times

“Not since Nancy Drew has a nosy, crime-obsessed kid been so hard to resist.” –The New York Times

“Gripping… I would recommend this book to anyone who loves a good mystery. I think everyone will be enthralled by Theodore Boone.” –Scholastic News

“A master of his craft.” –The Guardian

John Ray Grisham, Jr. (born February 8, 1955) is an American lawyer, politician, and author, best known for his popular legal thrillers. John Grisham graduated from Mississippi State University before attending the University of Mississippi School of Law in 1981 and practiced criminal law for about a decade. He also served in the House of Representatives in Mississippi from January 1984 to September 1990. He began writing his first novel, A Time to Kill, in 1984, and it was published in June 1989. As of 2008, his books had sold over 250 million copies worldwide. A Galaxy British Book Awards winner, Grisham is one of only three authors to sell two million copies on a first printing, the others being Tom Clancy and J.K. Rowling. Grisham’s first best seller was The Firm. Released in 1991, it sold more than seven million copies.