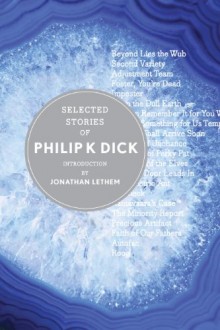 A new collection of short stories by Philip K. Dick has just been published by Houghton Mifflin Harcourt. With an introduction by Jonathan Lethem, the book contains 21 stories:

And remember, you can always download Dick’s less known short stories for free from Project Gutenberg.

Selected Stories of Philip K. Dick contains twenty-one of Dick’s most dazzling and resonant stories, which span his entire career and show a world-class writer working at the peak of his powers.

In “The Days of Perky Pat,” people spend their time playing with dolls who manage to live an idyllic life no longer available to the Earth’s real inhabitants. “Adjustment Team” looks at the fate of a man who by mistake has stepped out of his own time. In “Autofac,” one community must battle benign machines to take back control of their lives. And in “I Hope I Shall Arrive Soon,” we follow the story of one man whose very reality may be nothing more than a nightmare. The collection also includes such classic stories as “The Minority Report,” the basis for the Steven Spielberg movie, and “We Can Remember It for You Wholesale,” the basis for the film Total Recall. With an introduction by Jonathan Lethem, Selected Stories of Philip K. Dick is a magnificent distillation of one of American literature’s most searching imaginations.

Over a writing career that spanned three decades, Philip K. Dick (1928-1982) published 36 science fiction novels and 121 short stories in which he explored the essence of what makes man human and the dangers of centralized power.

Toward the end of his life, his work turned toward deeply personal, metaphysical questions concerning the nature of God. Eleven novels and short stories have been adapted to film; notably: Blade Runner (based on Do Androids Dream of Electric Sheep?), Total Recall, Minority Report, and A Scanner Darkly. The recipient of critical acclaim and numerous awards throughout his career, Dick was inducted into the Science Fiction Hall of Fame in 2005, and in 2007 the Library of America published a selection of his novels in three volumes. His work has been translated into more than twenty-five languages.