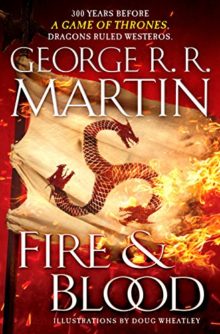 Fire & Blood: 300 Years Before A Game of Thrones

The thrilling history of the Targaryens comes to life in George R.R. Martin’s new masterly work.

Centuries before the events of A Game of Thrones, House Targaryen – the only family of dragonlords to survive the Doom of Valyria – took up residence on Dragonstone.

Fire & Blood begins their tale with the legendary Aegon the Conqueror, creator of the Iron Throne, and goes on to recount the generations of Targaryens who fought to hold that iconic seat, all the way up to the civil war that nearly tore their dynasty apart.