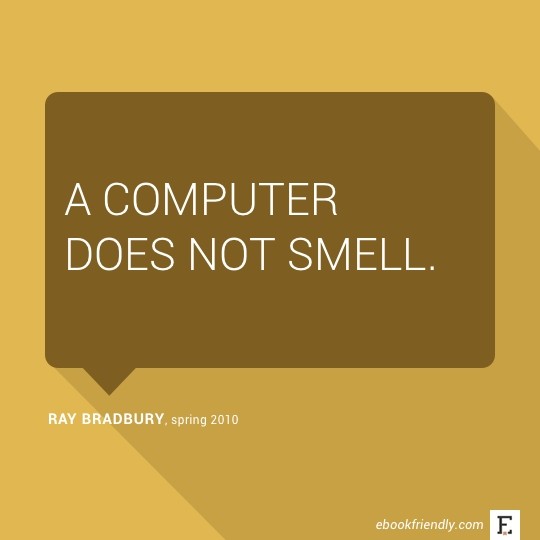 Ray Bradbury, one of the most celebrated 20th-century American writers was the strong opponent of ebooks.

In an interview for The Paris Review (“Ray Bradbury, The Art of Fiction No. 203“, The Paris Review, No. 192, Spring 2010), asked about what he thinks of ebooks and Amazon Kindle, Bradbury said:

Those aren’t books. You can’t hold a computer in your hand like you can a book. A computer does not smell. There are two perfumes to a book. If a book is new, it smells great. If a book is old, it smells even better. It smells like ancient Egypt. A book has got to smell. You have to hold it in your hands and pray to it. You put it in your pocket and you walk with it. And it stays with you forever. But the computer doesn’t do that for you. I’m sorry.

Despite Bradbury’s dislike of the digital books, his most famous novel, Fahrenheit 451, describing a dystopian future in which reading books is outlawed, was published as an ebook by Simon & Schuster in late November 2011.

Ray Bradbury about computers and books (quote) https://ebookfriendly.com/ray-bradbury-about-computers-quote/ via @ebookfriendly