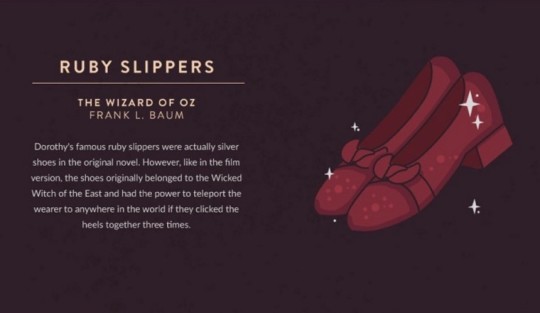 The new infographic lists the most memorable gifts described in famous books.

It looks like showcasing interesting things found in the works of fiction has recently become quite a wild infographic trend.

And there is also a fantastic visual that lists fiction’s best fiction. I’m sure you’d love to get some of these books as gifts – if they existed.

Books make great gifts, no one doubts about it. But let’s change the perspective entirely, and try to explore the gifts that can be found in books.

“Memorable gifts from literature” is the infographic that has just been released by the UK-based postal company Pack & Send.

You’ll find here The Cloak of Invisibility from Harry Potter, or famous ruby slippers from The Wizard of Oz. There are more: jewellery, clothes, toys, sweets,… and a couple of less obvious ones, such as bread, horse’s head, or a wooden horse.

Click or tap on the image to see it enlarged.

Via Man of la Book.