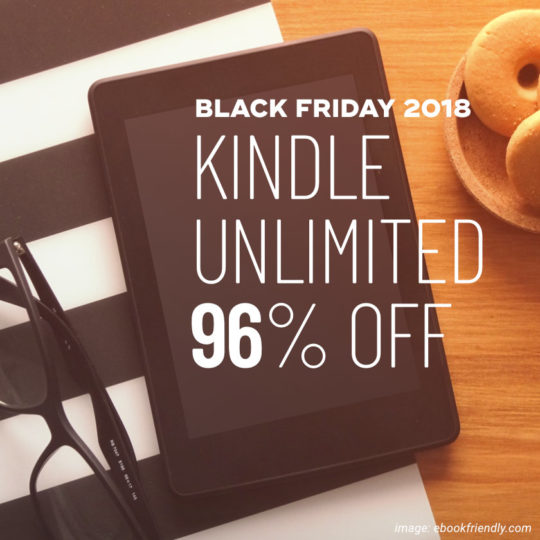 It’s one of the best Kindle Unlimited deals in 2018 / Image: Ebook Friendly

Every day, Amazon is revealing new pre Black Friday 2018 deals for their devices and services.

The new limited-time offer for Kindle Unlimited digital subscription is one of the most attractive deals so far.

Right now, you can get the 3-month Kindle Unlimited subscription for only $0.99. The monthly fee is $9.99, the total costs for three months would be . In means you save 96%.

The newest Kindle Unlimited deal is valid through November 30, 2018. It means it will be an active deal during the Turkey 5. Can we expect a better deal than that?

Yes, we are sure new deals for Kindle Unlimited will be revealed if not for Black Friday than for Cyber Monday 2018. Just like a year ago, you can expect the deals on long-term subscription plans. Last year the deals were as follows:

Make sure to check out our guide to Black Friday 2018 to see the growing number of deals on Amazon devices: Kindle, Fire, and Echo.

More about Kindle and Kindle Unlimited:

Save 96% on Kindle Unlimited in this early Black Friday 2018 deal https://ebookfriendly.com/kindle-unlimited-deal-early-black-friday-2018/ via @ebookfriendly